Texas MassResistance Fighting and Winning Against the Transgenderism Cult

Telling the truth in a sea of lies and compromises.    SEE VIDEO BELOW!

Beneath the surface: The opposition is pushing the transgender agenda in schools

The Senate votes the right way! 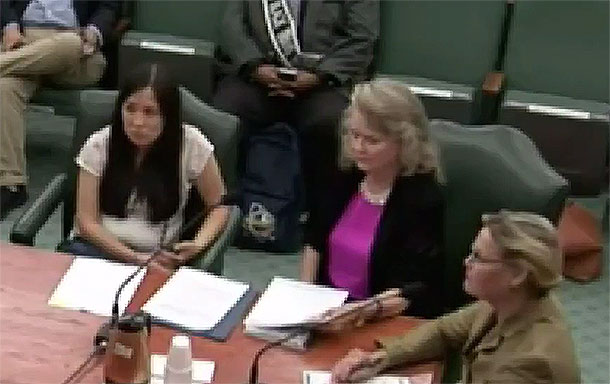 Facing down the committee. Three of the four Texas MassResistance mothers testifying at the Senate public hearing for the Texas Privacy Act.
On Friday, July 21, four Texas MassResistance mothers gave some of most the most hard-hitting and truthful testimony of the day before a State Senate committee.
They spoke at a packed public hearing on Bill SB3, known as the “Texas Privacy Act” by supporters and the “bathroom bill” by opponents.
Bill SB3 applies to state and local government buildings, including schools and charter schools. It requires that multi-person restrooms, locker rooms, and showers be only used by people of the same biological sex – not one’s so-called “gender identity.” In normal times this regulation would not be controversial (or even needed).
But the bill has infuriated the Left. Hundreds of people came to the State Capitol. The LGBT lobby – including an army of “transgenders,” other activists, representatives of corporations, and the well-funded national homosexual group “Human Rights Campaign” – packed the hearing room to try to stop the bill from passing. They railed about “discrimination,” “civil rights,” “suicide,” and the other usual topics.

Texas MassResistance: Standing out in the crowd

A lot of pro-family people testified, too. Most of them stuck to the “privacy” issue or other non-confrontational types of arguments. Our side tends to avoid dealing with the proverbial gorilla in the room – the subject of “transgenderism” or the radical LGBT agenda.
But not Texas MassResistance. The four mothers who testified included two former teachers and an attorney. They told the committee what no one else was willing to say.
For example:
Virtually nobody else on the pro-family side is willing to tell the truth this honestly.
This direct approach obviously sunk in. During the Texas MassResistance testimony, Committee members actually responded – with questions about the ACP and about how schools would deal with “transgender” students under this bill.
VIDEO of powerful testimony by four mothers! (12 min 48 sec)

Beneath the surface, it’s mostly about the schools

The LGBT lobby and their corporate and media allies publicly talk about this being a “civil rights” and “anti-bigotry” issue, etc. But beneath the surface is a larger issue for LGBT activists.
Right now in Texas the most aggressive focus of the LGBT movement is on the public schools. In cooperation with left-wing school officials, the Human Rights Campaign is even in many elementary schools pushing “transgenderism” on the youngest children. Having “transgender” children use the opposite-sex bathrooms, locker rooms, and showers throughout the state is a huge part of their strategy.
As a result, there were several teachers, school administrators, and many others from the education establishment testifying at the Capitol that day testifying against Bill SB3. (The National Education Association is working with the Human Rights Campaign to push “transgender” inclusion in schools across the country.

Testimony by the “transgenders” reveals a lot

There were lots of “transgenders” at the hearing. Almost all of them were men wearing women’s clothes. The testimony of many of them was quite sad and very revealing. They talked about the “bigotry” in society. They also talked about molestation, sexual abuse, and living very dysfunctional lives. They described feelings of suicide. They repeatedly made the point that unless their demands to use the bathroom and shower of their choice are granted, they will likely kill themselves.
All of this revealed to any observer that these people need real mental health help. For these people, being “transgender” is clearly a symptom of other tragic pain and trauma that is going on inside them. 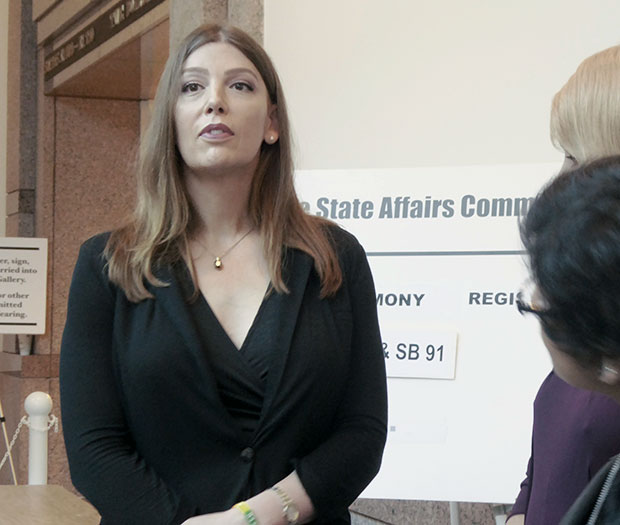 This man was called up to testify in the same group as one of the Texas MassResistance mothers. 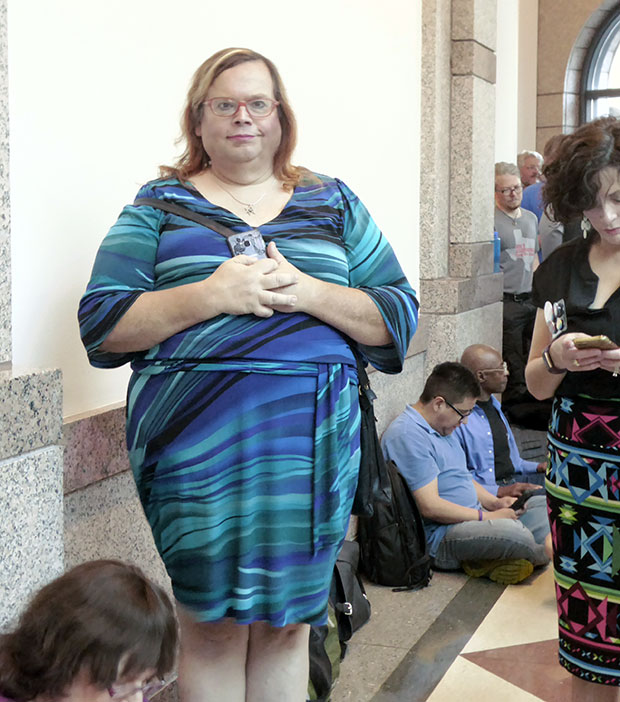 This man posed for this photo, then got into a long conversation about his life story.

The bill passes the Senate and goes to the House

At the end of the hearing, the Committee voted 8-1 in favor of the bill. On July 25, the bill went to the floor of the Texas Senate. After a lengthy floor debate, it passed by 21 to 10 with a few minor changes. It now goes to the Republican-dominated Texas House of Representatives, where the real battle begins.

Blocked by the GOP House Speaker. Bill SB3 is supported by the Governor and Lt. Governor, and a majority of the Republican-dominated Texas Legislature. It could easily pass both houses. But since the beginning of the year, the Republican Speaker of the House, Rep. Joe Straus (R-San Antonio), single-handedly refused to allow SB3 and similar bills to proceed. This has tremendously angered conservatives across Texas. They are even raising considerable money for opponents to run against Straus in the next election. It has also outraged conservative House members.
Why is the Speaker against the Texas Privacy Act? Local political observers give several reasons, including: (1) Straus gets lots of contributions from wealthy LGBT-friendly businessmen. (2) He believes the LGBT-generated propaganda that the bill will be “bad for business in Texas.” (3) He buys into the rhetoric that “transgenders will kill themselves” if they can’t use their preferred locker rooms, etc.
The current legislative session ends in three weeks on Aug. 17. It must get through the House by then. The pressure will be on the Speaker. We will continue to report on this.

A few days after her Texas testimony was given to the Texas Senate, Dr. Michelle Cretella was interviewed on the Tucker Carlson Show on national Fox News. She has continued to warn Americans about the terrible dangers that the transgender movement is inflicting on the nation’s children – much of which can cause serious and permanent medical damage.
Here’s the video of that interview:
VIDEO: Dr. Michelle Cretella on the transgender ideology and children
(4 min 43 sec)

Many of you may also recall Dr. Cretella’s speech on this subject at the Texas MassResistance conference on April 1.
Posted by Arthur Christopher Schaper at 11:14 PM