The bias against the rule of law is prevalent in our media.

It is beyond shameful.

Men and women paid high fees and played by strict rules to become law-abiding naturalized citizens in the United States.


Yet instead of following the legal process, the pathway to citizenship outlined for everyone who comes to this country legally, illegal alien migrants will pay a coyote a set sum to be trafficked into the country.

The latest scandal surrounding his abhorrent practice? 8 illegal aliens were found trapped and dead from heat stroke and dehydration inside a truck trailer. This truck was stationed inside the parking lot outside of a San Antonio, Texas Wal-Mart.

The point remains: these eight people were illegal aliens. They were trying to break into this country with no regard for our nation's laws or customs. This behavior is wrong, even though their deaths are tragic and terrible. 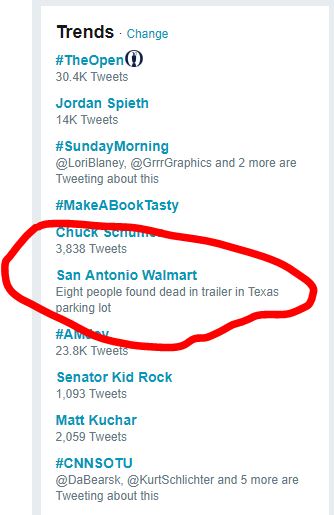 This is one more example of the journalist malpractice of the left-wing, corporate  media.

And it needs to be confronted for what it is: misleading, Fake News.

Posted by Arthur Christopher Schaper at 10:46 AM