This man was taking illicit, explicit photos of himself.

He would send pictures of himself in half-naked to other women.

When some of these lewd pictures ended up on his Twitter feed, he denied them at length, until Anthony Breitbart put the pressure on him so hard, that he eventually had to come clean about his Internet affairs.

He resigned in disgrace, and a Republican won his seat in a special election, even though the district is 3-to-1 Democratic.

Of course, a Democrat who resigns from elected office in disgrace does not remain disgraced forever.

It usually lasts about a week or two.

Weiner then ended up in glossy magazines with featured stories focusing on his upbringing and his political ambitions. They also gloried over the fact that he was getting therapy and working hard to make his marriage work.

Then Weiner launched a bid for Mayor of New York City.

Yet by then, the "common people" had had enough of this guy. I still remember the baker at one borough restaurant kindly imploring the young former House Rep to drop out of the race and just focus on his family.

Instead of kindly listening to the constituent and moving on, Weiner went on a tirade: "Are you judging me? Don't you judge me!"

There is no condemnation in expecting our elected officials to act with a modicum of respect and dignity in the public. Other prospective voters let him have it, saying that they would never vote for him.

Then lo and behold, more revelations that Weiner was taking pictures of his private parts and sending them to other women. He had not been in recovery at all, so to speak. Everything was falling apart of this creepy YOrk geek, who now was coming out as a full-on pervert.

He lost that race for Mayor of New York, too.

Even Lawrence O'Donnell could not ignore this slow-motion trainwreck.

Of course, the failure of this liberal Golden Boy was not a big issue to the media. The national press went crazy when a Missouri Congressman described the importance of protecting life and not punishing an unborn child just beacause the baby was conceived in rape.

But Weiner sticks his weiner on social media mulitple times and loses two bids for public office? The media ignores it.

Then, finally, it comes out that Wiener was sexting to a minor.

Weiner was busted, now a convicted criminal, and going to prison.

Nontice how the ew YOrk Times headline minimizes the crime:

What did he do, then? Curse at a federal judge? Walk around naked in the Capitol Rotunda?

Anthony D. Weiner, the former Democratic congressman whose sexting scandals ended his political career and embroiled him in a tumultuous F.B.I. investigation of Hillary Clinton before the election, pleaded guilty to a felony on Friday, crying openly as he admitted to conduct that he knew was “as morally wrong as it was unlawful.”
The plea agreement ended a federal investigation into a series of sexually explicit pictures and messages that Mr. Weiner sent last year to a 15-year-old girl in North Carolina.
It capped the long, tortured downfall of Mr. Weiner, who ruined a once-promising career in Congress and then spoiled various attempts at resurrecting his reputation, all through his uncontrolled habit of using social media and texts to send explicit images to women.
This is a pretty lengthy, even tragic write-up. "Poor Weiner! Couldn't  keep his weiner to himself."

I wonder if this story even made it into the A section of the Times. After all, the narrative of perverse, Democratic politicians is lengthy and sordid, but it simply is not the news that fits the New York Times narrative of propping up corrupt Democrats while doubling down on every infraction committed by a Republican.

His sides were heaving, and he looked like he was holding back tears as he stood on Union Square East.

“Thank you,” he coughed before bolting into a yellow cab.

Just one day ago, the 52-year-old former New York congressman and mayoral candidate pleaded guilty to sexting with a 15-year-old girl in North Carolina.

The facts of the case were grotesque. Weiner had engaged in sick “rape” fantasies with the girl, and urged her to dress up in plaid schoolgirl skirts. On Friday as he admitted his guilt and embarrassment to the judge, he cried.

Soon after leaving federal court — with prosecutors’ threat of a two-year prison sentence still ringing in his ears — he learned that his wife had just filed for divorce.

It's worth noting that the media did not play up this story all over the country.

Everyone should make this story a standard example of the double standard of the media, going after conservatives for every mistake, idle word or deed that they state or do. On the other hand, a fully-fledged pervert, who had been pushed out of office twice for his perverse behavior.

This former Congressman went to prison, as part of his plea agreement is that he would not appeal a 21 to27 months sentence. And he has to register as a sex offender. 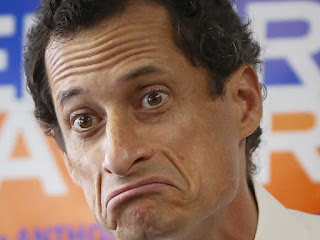 Now, compare this coverage to the former Speaker of the House Dennis Hastert, who went to prison for bank fraud charges associated with covering up his acts of child molestation as a wrestling coach. Shameful indeed. How much coverage did that story get? Plenty, and we the reading public learned about Hastert's victims, too, and also about the measures taken by former colleagues to reduce the sentence he would serve.

It was a multi-day news story.

Again, the media double-standard is unshakable and unmistakable. Weiner commits sex crimes, a liberal Democrat, and there is little fanfare. A Republican engages in sex crimes, and the whole world will hear about it for at least a week, with in-depth exposes.

That is shameful, too.

Posted by Arthur Christopher Schaper at 11:05 AM