Here are my full remarks to Torrance City Council on July 18, 2017 calling out the rude and corrupt Mayor Pat Furey, who has chosen to side with Brown Supremacists and engage in hatemongering character assassination instead of doing what is right for the citizens of Torrance.
Don't believe me? Check out this photo:

I cannot say “honorable mayor”, so I will say ---
To the Torrance City Council:
#DontMimicTheCapedOne should turn into
#DontPlacateTheCorruptOne
That would be you, Pat.
I am surprised and offended that you as an elected official would entertain and enable Brown supremacists and their corrupt cohorts. You shook hands with a large racist who had harassed parents and children at a local Fourth of July Event. I wonder what they voters will think when they see a mailer featuring your handshake with such thugs. 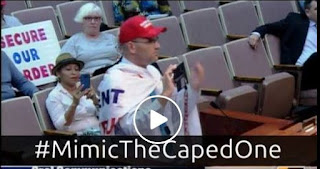 Let’s not forget the headline in the Daily Breeze which announced that you were fined $35,000 for colluding with a PAC supported by McCormick Ambulance.
Did you forget that, Pat? I stood here last year with the Daily Breeze headline in my hands, waving it for everyone to see? Do you  forget that that we the citizens of this city finally demanded that your corrupt son be removed from the Traffic Commission because three times he had been fined for violating campaign laws.
Then again, such corruption should not surprise me. Like father, like son.
I will make sure that the residents of our city don’t.
Then you went so far as to attack citizens for exercising their First Amendment rights:
From your Facebook post.
Recently there has been a small group of people attending city council meetings and other political gatherings throughout Los Angeles County disrupting meetings. One such person has been most rude and vocal advising all that he is a resident of Torrance.
“Advising people.” What’s that supposed to mean?
Today I sent a letter to all of the other mayors in Los Angeles County apologizing to them and their citizens for the disruptive, hateful behavior of these people.
I am pretty sure you were not talking about me. I do not disrupt meetings. I call out lawlessness and corruption. Exercising one’s First Amendment rights is not hateful. Your corrupt, bullying behavior is hateful. I know that you attacked Mike Griffiths behind closed doors after the McCormick Vote. You and your family are a bunch of political thugs. Now you are getting called out for it.
In addition, I assured the mayors and their citizens that these people do not represent the elected leaders and citizens of Torrance and that the people of Torrance do not endorse the antics of these fringe element. 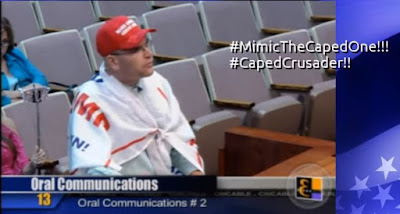 Pat, YOU do not represent the citizens of the city of Torrance. Your corruption, your  cowardice, your disregard for the rule of law, and your arbitrary treatment of others is inexcusable. And indeed, I submit that the city of Torrance is better than that. Better than you.
I also heard you say in a public hearing that “Unfortunately, they have a right to do that.” The First Amendment is not something that I find to be unfortunate. You gave me a copy of the US Constitution a few years ago.
I think you need it back.
I cannot believe how petty you have become, Pat. You attack residents for calling out the pension crisis, the rise garbage taxes and other fees. The rampant disregard for the citizens at the expense of your special interest supporters.
But at least have the knowledge of knowing that I live in your head—rent free.
At least I can take the letter that you signed off on opposing SB 54 and inform the whole state that the liberal Democrat who supports illegal aliens and opposes the rights of citizens had to oppose SB 54.


Have a good evening.
Posted by Arthur Christopher Schaper at 7:30 PM