I think former Alabama Supreme Court Judge Roy Moore is not just a conservative, but an iconoclast of the first order. Twice elected to Alabama’s Supreme Court, he refused to bow down to political correctness or judicial tyranny. He was first removed from the bench for refusing to remove the Ten Commandments from the Alabama Supreme Court House.  I am a New Covenant man, but I believe that the Ten Commandments still belong in our court houses. Alabamians did not care, and they re-elected Moore to the Supreme Court. When the hard-core natural rights conservative refused to honor the corrupt, anti-judicial gay marriage decision in 2015, Moore was removed a second time.

Moore has the forthright courage to declare on national television to the petulant Chris Cuomo that our rights come from God, not from the government. The fact that the New York Son of a … Bad Governor doesn’t know the fundamental values of our country prove how ignorant, arrogant, and out of touch our media have become. Armed and ready at a moment’s notice (ask his wife!), Moore is a great man, and he would make a great US Senator for the State of Alabama. 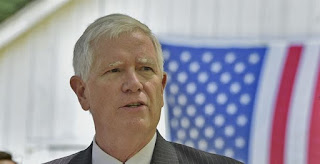 I want to see more conservatives in the US Senate, so I want Congressman Mo Brooks.

He is an outspoken Trump supporter. Yes, that’s good. But there’s more. He wants to repeal Obamacare. So much so, that he submitted a one-line bill to the House of Representatives which simply stated “The Affordable Care Act is now henceforth repealed.” Pretty simply, don’t you think? A bill that can be read in one sitting, as opposed to the telephone book-sized pieces of legislation.
He supports the Second Amendment without reserve. He opposes the crony Export-Import Bank, a slush fund which benefits big business with our taxpayer dollars, while small businesses must fund loans for themselves. He and fellow US Senator Richard Shelby would be a masterful team fighting against DC Corruption. But the biggest reason I support Brooks over Moore? He vocally opposes McConnell, demanding that he step down as Majority Leader. Senator Brooks will be one confirmed vote against the weak-kneed, pro-crony, liberal-leaning Majority Leader, who refuses to lead, who refuses to ensure passage of Trump’s—of our—agenda.

Now, who is McConnell’s pick? Former Alabama Attorney General Luther Strange, who has been tight-lipped about President Trump. Strange was investigating former Alabama Governor Richard Bentley, who resigned in disgrace, but not before he appointed Strange to replace Sessions. What a strange idea—and it reeks of corruption. Strange has got to go just for that!

If Brooks wins the special election, McConnell faces a massive blow to his DC pre-eminence, which will trigger snap resignations and new elections.  We all want to “Ditch Mitch” right? Then we need to shake up who gets elected to the upper chamber. The Majority leader is an elected office, too, but we do not elect him (or her). Whether I like it or not, the Majority Leader or Speaker has a distinct set of constituents: his fellow US Senators.

Want to change the majority leader? We need to change the people whom he represents. We need the most anti-Establishment Republicans winning seats in the United States Senate. Sorry to break your hearts, people, but draining the swamp means more than one election. It means an attitude adjustment from us, and more conservative victories across the country. That’s why I support Ohio State Treasurer Josh Mandel’s bid to unseat out-of-place regressive leftist Sherrod Brown. That’s why I want Ted Cruz to not only win re-election, but take on a much needed leadership role in the US Senate, whether his colleagues like him or not. And that’s why I want Mo Brooks (and Judge Roy Moore) to make it into the Alabama special election run-off.

McConnell knows that Establishment-tinged Beltway connections are hurting his picked candidates like a belt slapping a wayward child. So, he’s resorted to smearing outsider Republicans as corrupt insiders who misuse public funds and enrich family members with government largesse. In 2016, in the Indiana US Senate race, McConnell tapped Todd Young as the replacement, even though Marlin Stutzman was the conservative outsider. McConnell and Co. issued misleading and well-placed campaign smears against Stutzman, and Todd Young now goes along with Mitch McConnell.

Now some conservatives worry about direct primary challenges. Will attacking Republicans in otherwise safe seats give Democrats more opportunities, which had occurred in 2012 with Todd Akin or Richard Mourdock? I think they should shake those fears off. Four years later, one of the most unlikely, most politically incorrect, most media-demonized candidates won the highest office in the land. Since then, the corrupt liberal media has been so expertly marginalized by the Trump Administration, which no one cares what they or their corporate media sponsors have to say. All those anti-conservative smears will fall on deaf ears.

If we want to Make America Great Again, we need to Make Washington DC Small Again, and that means getting rid of the crony Wall Street-Big Business-Big Amnesty phalanx which has overrun the Beltway, pulling the strings of legislative leaders like Mitch McConnell. Primary challenges fought on conservative activists’ own terms is the way to go. President Trump has the grassroots, conservative counter-culture heartbeat We the People have long yearned for. Now let’s put it to work.


Let’s elect “Mo” conservatives to the US Senate. I endorse Mo Brooks for US Senate, and I urge everyone who is able to donate to his campaign (full disclosure—I have donated to the Senate Conservatives Fund precisely because I want to end the non-conservative Republican leadership hindering Trump’s and our agenda in Washington DC).
Posted by Arthur Christopher Schaper at 9:02 PM