I Survived Berkeley (And I Will Return)

I survived Berkeley, CA—not just in April, mind you, but also this past weekend (August 27, to be precise). Yes, I did. It was not my first trip up to the East Bay. On April 27, I reveled in an unrivaled victory for the free speech movement. Conservative speakers from all over the country descended upon Berkeley to rally for our God-given freedoms. 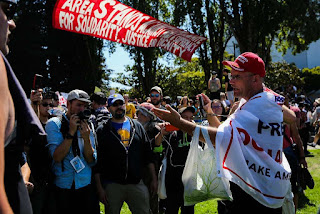 August 27 was not a defeat, either, despite the evil perpetrated by the Democratic Party’s new domestic terrorist wing, Antifa. George Orwell must be rolling in his grave, or if he could he would sit up and shout “Told ya so!” to these blackened goons. Good is Evil, War is Peace, and Truth is Error. The shields of shrouded hatemongers carried signs which read “No hate,” all while stealing property and pummeling their opposition. The sight of two "Latinos for Trump," a father and son, was too much to bear for these pitiless thugs, who beat and mauled them. Covered in black, hiding their faces to enact destruction and fear, Antifa hordes, funded by the anti-American globalist George Soros, want to destroy our liberties. 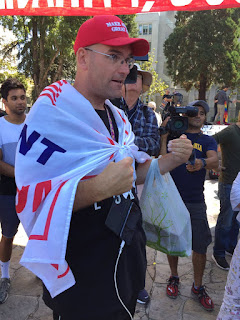 I can’t believe how violent and hateful the Antifa, KKK, George-Soros funded Nazi left has become. Or rather, I am shocked to see how quickly the anti-American forces in this country have whipped themselves into such a violent frenzy. For 15 minutes, I was hounded by black-clad thugs, who in vicious conspiracy beat down innocent participants and bystanders--anyone who seemed like a rabid fascist. 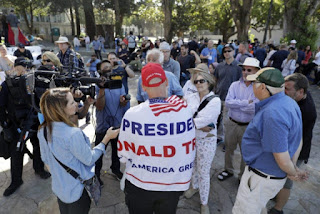 The day started out much better. The police had sequestered the park that morning. Only peaceful protestors could attend.  For two hours, I clashed with supporters and detractors of President Trump, the cult of political correctness, and freedom of speech. I met with a number of people who were willing to talk. At around 1:15 p.m., friends of mine barraged me with text messages and phones calls: “Get out of the park! Antifa is coming!” 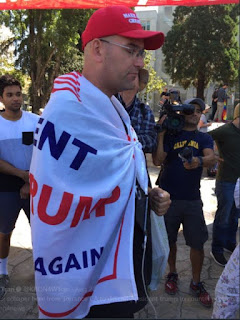 I should have moved a little faster. Then again, I was worried about the three other people with me at Berkeley; but gathering them together and getting out safely became moot when my own safety was at risk. At first, I thought that the lined-up police in riot gear would have easily handled and fended off these would-be marauders. Then I saw the police walking away from the square. 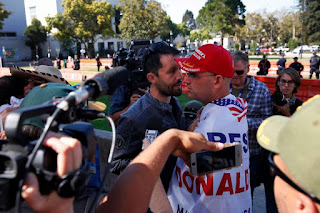 Unbelievable. I took off as fast as I could, but two looming hatemongers rushed toward me. First they snatched off my MAGA hat (that wouldn’t be the first time someone took my hat or tried to steal it from me). Then someone ripped the Trump banner off my shoulders. As I quickened my step, I got sprayed with glitter, and my face started getting really hot: an Antifa thug “glitter-bombed" me. Finally, a Berkeley police officer blocked them from committing further harm. 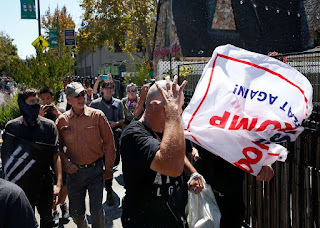 Right away, I realized that there was no safe way I could get back to my car. Then I remembered the young lady during the San Jose rally last year who had turned into the outer lobby of a building. Cornered by press agents and agitators, she stood by, taking egg to her face and enduring hateful taunts. If the press were going to follow me, then they would serve as my wall of protection. I stepped into a gas station, found a spot near the door, and sat down. 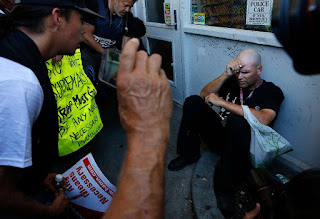 As expected, the press surrounded me, recording and snapping pictures. A handful of left-wing protesters shouted at me. I just meditated on key verses which I have memorized for straitened times (Isaiah 54:17; 1 John 4:17). One hideous lady in pink stood over me telling me that I had to go. Another guy mocked me for supporting Trump and “hating working people." I went back into the same pattern I had followed at MLK Park: I talked about why I supported Trump, free speech, and his successful policies.  I didn’t notice that I was spit on until after I read online accounts.

Finally, a police officer emerged out of the crowd. He asked me if I needed medical attention, then escorted me to the sidewalk. A reporter came near and said to me “I am with you. If you support the Constitution, I am with you.” As she helped me to the sidewalk, friends drove up all of a sudden. They recognized me right away, took me in, and drove me out of the area. 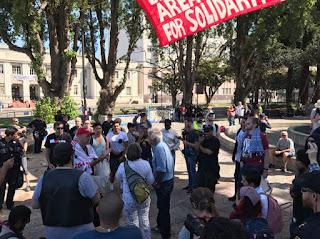 I was dazed and shaken up, to say the least. My friends drove me to my car (after throwing off another rabid liberal who was following us). The skin on my arms and around my face began getting really hot. I had to clutch my seat belt to defer the pain from the pepper spray. Back at home, I stood in the shower for an hour to cool off the painful burning sensation.

The next day, I saw my story reported on all the major conservative news sites. Friends told me that a photo of me draped in my Trump banner was appearing on the front of newspapers all across the country. The Battle of Berkeley, August 27, 2017 was no defeat, but a consummate victory for conservatives. The presence of peaceful Trump supporters compelled the liberal media to report our side fairly. The violence and destruction, as lamentable as it may have been, signaled that the corrupt, vile, immoral, secular forces which have sought to undermine our country are falling away. 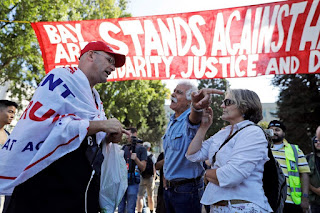 The Left has overplayed its hand, and the police powers in the Bay Area are now on notice. Violence as a final resort for sore losers is a signal that they will never recover, from the Confederacy’s secession movement to the KKK’s anti-American terrorism, to the bullying of Birmingham, Alabama’s Bull Connor against the Civil Rights Movement. 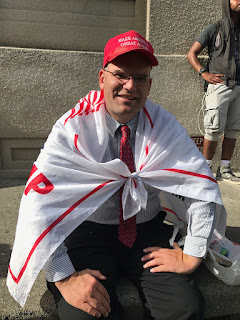 I say to all conservatives: stop being afraid. I survived Berkeley, and believe me I will return. Our liberties are at stake, and the victories we are gaining are too precious to lose. 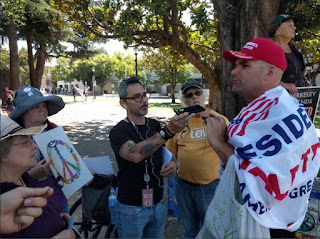