Congressman Lou Correa (D-Santa Ana) has a picture of Lady Liberty posted on his wall.

And she is wearing a hijab.

The picture was submitted as a part of his Congressional Art Contest.

It's offensive. It's wrong.

Islam and our constitutional republic are completely incompatible.

When I went to Correa's district office, the door was locked in my face. I had to ring a buzzer in order go get inside. The staff inside asked me what I wanted.

When I told her I wanted to talk about the Lady Liberty painting, they asked if I was a member of We the People Rising.

What? Why is the staffer so worried about We the People Rising?

I explicitly came on my own with my own viewpoints on this matter, since I disagree with the argument about the separation of church and state.

For me, Islam and the United States' culture of Judeo-Christian values and Western principles cannot exist side-by-side with Islam.

Liberty cannot be wrapped in a hijab, and wrote about that in one of my more recent articles for Townhall.com. Click here.

The staffer let me in the room, yet required me to sign in. I was a little offended by that, but so be it.

When I sat down, I explained to another staffer why I did not like the painting, and why I demanded that it be taken down.

As I was finishing my last comment, one of Correa's staffers burst into the room and told me to leave!


The staffer above even claimed that We the People Rising were sending death threats to Congressman Correa's office--that's simply not true!

This guy claimed that he was willing to talk to me outside, but as soon as I left the office, he slammed the door in my face!

The Congressman is absolutely determined to protect the picture on the wall, but why?

And what has gotten his office staffers so worked up that now people have to buzz in just to see him?

And tell him to take down that offensive, un-American painting! 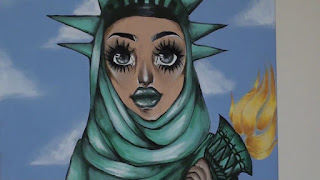