Hong Kong MassResistance – our newest chapter! Taking on the “gay marriage” fight in their country.

Also part of the battle: how the gov't defines "transgender" 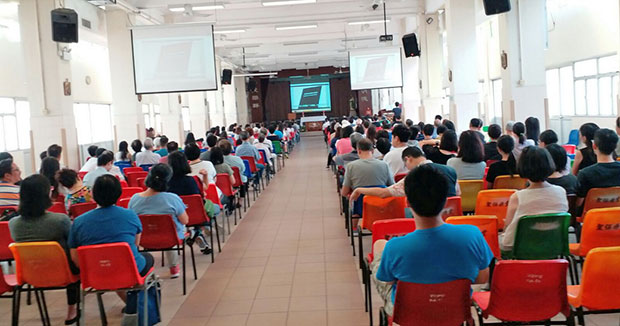 Chinese version of the MassResistance video "What gay 'marriage' did to Massachusetts is shown to parishioners at a Catholic Mass in Hong Kong.
Our newest MassResistance chapter, Hong Kong MassResistance, is off and running! Led by a Catholic priest and a core group of eight veteran Hong Kong pro-family activists, they held their initial meeting on July 15 in Kowloon.
There are serious concerns and fears in Hong Kong that the LGBT movement has targeted the country to force “gay marriage” there, followed by the rest of their agenda in the society and schools. 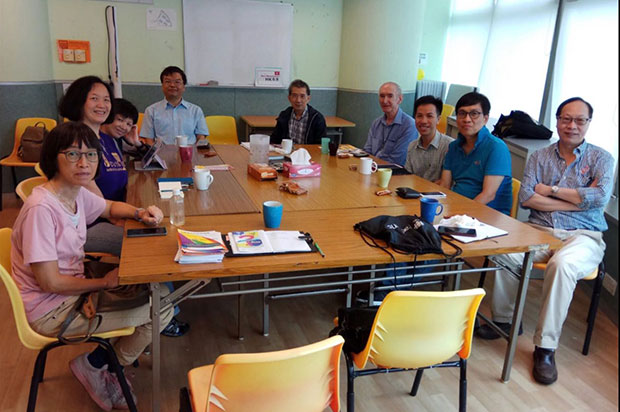 The core group of Hong Kong MassResistance at their inagural meeting on July 15.
In general, Hong Kong is very socially conservative – much more so than Britain, which controlled it until recently and established its social and political institutions. Marriage is strictly one man and one woman, and the government now vigorously supports that.
But much of the media there has become aggressively liberal, and is working to help push the LGBT movement. This has upset many people, and was an impetus for forming the Hong Kong MassResistance chapter.

The “gay marriage” fight in the Hong Kong courts

The big threat in Hong Kong right now is “gay marriage.” The LGBT movement knows it cannot win through government action or public opinion. So they are trying to force it through the courts – as they did in the US and recently in Taiwan.
However, the courts in Hong Kong do not appear to have the powers to broadly change the country’s laws, completely unchecked, as done in the US. The other branches of the government can decide to use appeals and other methods to thwart blatantly activist courts.
Thus, the LGBT movement’s strategy has been to push hard to attack relatively small marriage issues that could be used to bring “gay marriage” into the country using legal technicalities.
For example, two recent cases involved minor issues meant to push eventual ‘gay marriage’:
The LGBT movement is clearly fighting hard to advance their agenda.

As a result, there is a move to alert the population to the dangers of “gay marriage” and get the government to tighten the laws and become even more aggressive about defending these cases in court. Also, there needs to be pressure put on the government as it moves to define “gender recognition” regarding the “transgender marriage” case.
Hong Kong MassResistance recognizes that we need to get involved with these issues.

Unlike the rest of China and Taiwan which speaks Mandarin Chinese, the people of Hong Kong speak the Cantonese dialect of Chinese. Both dialects use the same Chinese characters, but the words sound much different. Therefore, a special Cantonese version of the MassResistance video, “What gay marriage has done to Massachusetts,” was created for Hong Kong. (There is also a Mandarin version of our video that is used in Taiwan.) 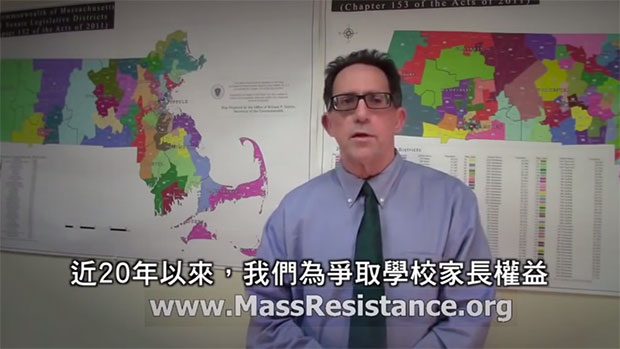 The Cantonese version of our MassResistance video "What 'gay' marriage did to Massachusetts." In the dubbed video, Brian Camenker (above) speaks Chinese! Watch the video here.

Getting the truth out!

On May 27 and 28, Hong Kong MassResistance showed the video to 400 people at three Catholic Masses. They will also be promoting the video in Hong Kong Catholic newspapers. In addition to that, of course, they are promoting the video across the country.
The HK-MR core group will meet again this month and work on plans to expand their reach and discuss coordinating with other groups, and strategies to be as effective as possible. They are also designing an official Hong Kong MassResistance logo – appropriately with the text in both Chinese and English.


The Hong Kong MassResistance group is a great addition to the worldwide battle! We will keep you informed on their progress.
Posted by Arthur Christopher Schaper at 10:26 PM