Another Daily Breeze article targeting Mayor Pat Furey, another bad day for the city of Torrance.

There is no nice way to put it: Pat Furey is a Big Labor Union Whore who will do the bidding of the public sector unions, and will take no leadership to do anything about the onerous pension liabilities eating away at the city's budget.

1 in four dollars is now going to retirees. How does any city stand to stay solvent when all the money is going out to window? There is no funding for public safety, infrastructure improvements, etc.

And in the meantime, Furey wants to placate racist Brown Supremacists who have harrased women and children while upending city council meeting throughout the county.

What kind of a political fraud is this guy? 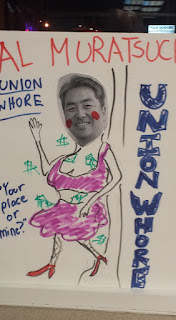 Torrance city pensions rank in state’s top 10 for retireesearning more than $100,000 a year

Torrance is ranked eighth in the state for the number of retired employees — 222 — drawing CalPERS pensions of more than $100,000 a year, according to data released Wednesday by nonprofit government watchdog Transparent California.

Everyone is getting fat of the taxpayer. When does the paying out end?

When does the bleeding stop? I fear that there is no workable political solution to this problem, however. 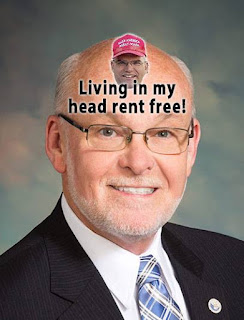 Who is going to run on a balanced budget/cut the entitlements program?

Who is going to campaign on the argument that police officers and firefighters are retiring with too much pay?

That’s more than any other South Bay city and second in Southern California only to Long Beach, which has 360 members of the $100K-a-year club in the California Public Employees’ Retirement System. Los Angeles, which like many other large cities has a separate pension plan from CalPERS, has 1,938 former workers making over $100,000 a year in retirement.

Doesn't it mean that people are retiring with more money than they had earned from year to year.

The number of former Torrance municipal workers pulling in more than $100,000 annually in retirement jumped 41 percent in just the last four years, said Robert Fellner, who compiled the data. That’s because workers benefited from lucrative changes to the pension plan about the turn of the century, he said.

A lot of retirees are cashing in while cashing out. Who's left holding the bag?

We the Torrance taxpayers, that's who.

“That whole class of workers has now started retiring and that’s why the (retirement) checks are so much bigger than if you compare them to the previous generation” of government workers, Fellner said.

And that is a crime. It's immoral to make children and grand-children pay for the excessive retirement packages to public employees. This is beyond outrageous.

Public employees can retire after 30 years with a generous 90 percent of their highest salary, whereas previously it was no more than about 60 to 70 percent, he said.

OUCH! We are paying people who do not work, and we cannot pay people we need to work.

When does the hurting stop?

A state pension reform bill that lowers costs — but only applies to new hires, not existing employees — was passed in 2013 and adopted by many cities, including Torrance. But that will not help to reduce costs until three decades from now, not today, Fellner said.

Three decades from now, most of the people who own homes in Torrance may leave the city and never look back. It could get to a point where homeowners just walk off the property and refuse to pay. Why should legitimate, hard-working Torrance residents pay for the political cowardice of the city councils, both past and present?

Of course, pension costs are a reflection of the high salaries and benefits public employees receive that are usually far more generous than the private sector.

"Too generous" would have been a better statement.

That’s why Mayor Pat Furey, for instance, — a Democrat heavily backed by municipal unions and in some cases their well-funded political action committees during the last mayoral campaign — referred to the issue as “pension envy.”

He made $218,657 in salary and benefits in 2013, his final full year as a senior deputy county counsel before retirement. Furey’s pension and benefits in retirement were $58,656 after 15 years of service in 2015, according to Transparent California.

Wow. That's a lot of money. Yet this guy still played nice and went all in with the corrupt McCormick Ambulance PAC.

“There’s not much you can do about the pensions created,” Furey said. “I wasn’t a member of the City Council when they created CalPERS.”

Yes, but he voted to approve retro-active pay increases to the labor unions.

Furey added that Torrance had already completed its pension reform efforts and that, as longtime employees retire eventually, things will “even out.”

They are not evening out--they are actually getting more costly. Here comes the bankruptcy calls.

He noted that in recent years Torrance has contributed an additional $8 million to reduce its unfunded pension liabilities that run into the hundreds of millions of dollars.

A  one-time contribution from a land sale. Whoop-de-doo.

Councilman Mike Griffiths, who responded via email, said he was unable to say much because city officials are negotiating new labor contracts right now.

The negotiations need to be serious, reform-minded, and cost-cutting.

Councilman Geoff Rizzo did not respond to a request for comment. He made $176,560 in retirement benefits in 2016 after 30 years of service with the Torrance Police Department, according to Transparent California. 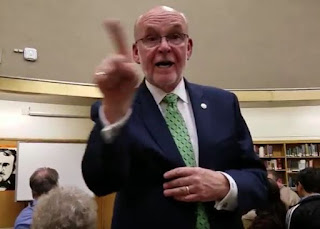 But Aurelio Mattucci, who is running for a City Council seat next June, said more pension reforms are needed. He did not provide specifics.

What did I say? No one is going to run on a platform of "I am cutting your retirement."

“It is alarming, to say the least,” he said of the Transparent California study. “We seem to have lost sight of good government, one that looks out for the overall well-being of the people of Torrance. We are, in many instances, overpaying, overpromising and, quiet literally, pushing Torrance toward bankruptcy.

“The numbers just don’t add up, no matter how you try to manipulate them,” he added.

Manipulate is definitely the word, especially from this corrupt bargain of handing away the entire store to the public employee unions.

And Union Whore Pat Furey is going along with the whole scheme.