The Modesto Bee has reported that Stanislaus County sheriff's deputies are cracking down on illegal pot shops, which are eating away at the legal marijuana businesses, all recently established following the passage of Proposition 64.

I thought that legalizing recreational marijuana would do away with the black market? Certainly that's what the proponents of Prop 64 believed, and one of the reasons why the initiative passed by a significant margin in 2016.

What went wrong? What was in the iniative, and thus the reasons why I opposed the initiative, even though I believe that people should not be locked up, placed in jail for using a drug that simply makes you ... stupid.

I voted NO on Prop 64 precisely because there were so many poison-pill provisions in the legislation, including language which would undercut one of the goals of the bill--shut down the black market and bringing marijuana sales into the open. The initiative imposed a massive sales tax on recreational marijuana products. The initiative also included stiff penalties for marijuana related crimes, including the loss of one's Second Amendment Rights for a non-violent misdemeanor. These two problems, along with a host of other issues (the fact that marijuana use, sale, and distribution remains illegal at the federal level; the impossibility of banking because marijuana sales violate federal law, etc.) made Prop 64 a bad proposition.

But the biggest problem was that stiff added sales tax of 15%. Lo and behold, because the costs of legal marijuana are so high, much higher than the drugs pushed on the street, the black market survives and even thrives in the state of California. Why bother buying legal pot, which is excessively expensive, when you can buy it cheaper from the seedy drug dealer?

I favor decriminalization for possession and use of marijuana, since locking people up does not get them sober nor does it set them free from the addition. One reason why? It's even easier to get drugs in prison than on the street? However, Prop 64 was the wrong approach for many reasons to phase out onerous legal consequences for drug use or possession. The proof is the fact that the black market has not be closed down or forced out of business by the legal compte

Proponents expected a collect greater tax revenue with the passage of Prop 64. What happened instead is that the black market has only gotten bigger, while the marijuana revenue failed to meet projections. No end to the black market, lower-than-expected tax revenue, and now police officers throughout the state of California must divert their already strained resources to crack down on these illegal pot shops. 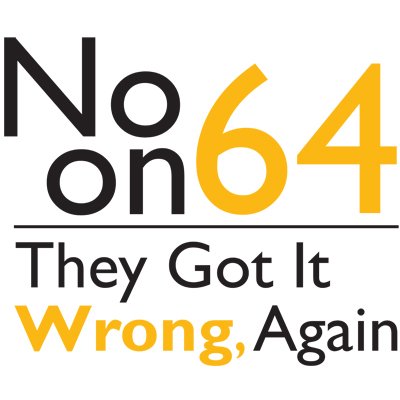 It's time to have a thoughtful discussion about decriminalization of controlled substances, one that recognizes the potential unintended consequences of marijuana use, one which allows law enforcement to stop down serious crimes and track down those criminals, but most importantly one which understands how markets work, how free enterprise works, and which recognizes the power of competition as well as government control.

Thriving black market in StanislausCounty is hurting legal cannabis businesses
BY ERIN TRACY
MAY 16, 2019 01:18 PM, UPDATED MAY 17, 2019 08:32 AM
Play Video
DurationÂ 1:55Take a look inside a legal marijuana business in Modesto

Bob Blink of Lyfted Farms and Michael O'Leary with Medallion Wellness describe the production and sales of Marijuana on Monday May 6, 2019 at Lyfted Farms in Modesto, Calif. BY JOAN L LEE
Since the outdoor growing season for cannabis began last month, the Stanislaus County Sheriff Department’s Special Investigations Unit has dedicated at least one day each week to eradicating illegal grows.

Critics say cannabis is legal now and it’s safe; law enforcement should focus their efforts on dangerous drugs like methamphetamine and heroin. The multi-jurisdictional SIU investigates those drug crimes as well, in addition to others like gang crimes and human trafficking.

But law enforcement and the businessmen who’ve obtained permits and licenses to grow and sell cannabis in Stanislaus County say the illegal grows not only undermine the legal operations but attract violent crime into neighborhoods, produce untested, sometimes unsafe products and create environmental hazards.

Sgt. Bruce Mitchell, supervisor of the SIU, said they are focused on large-scale operations, not small grows just over the 6-plant limit for personal use.

He said the large grows are targets for robberies and burglaries and both the criminal and the victim are usually armed, bringing gun violence into neighborhoods.

“We have had a number of incidents where people will try to break into places like this and grab five or six plants and there ends up being a shooting,” Mitchell said earlier this month at a 2,200-plant illegal grow in Patterson.

About 2,200 plants were eradicated from illegal indoor and outdoor marijuana grows at a property in the 2900 block of Orange Avenue, just outside of Patterson, on May 2. By Erin Tracy
Sheriff Jeff Dirkse said there was a period of time during changes in the law that illegal grows were not a priority.

“Beginning this year, we have a renewed our enforcement activities against illegal grows and removed over 22,000 plants in March alone,” he said. “If people want to use marijuana recreationally or medicinally, they have nothing to worry about from us so long as they follow the appropriate laws, no different than alcohol.”

But he said illegal grows “create a number of public safety hazards that we are concerned with, including illegal pesticides, black mold, armed robberies and general increased complaints and calls for service.”

The Sheriff’s Department estimates there are 1,500 illegal grows within the county at any given time. Mitchell believes as many as half of those involve Mexican drug cartels.

He said marijuana appeared to have motivated a 2017 unsolved double homicide near Riverbank in which two men were found dead at an illegal grow.

One man was found dead outside a warehouse behind the house on Claribel Road; a broken wooden bat next to him, according to court documents. A second deceased man was found tied to a chair inside the warehouse, where marijuana was being dried and processed. A grow inside the house had been cleared out.

Legal operations have safety plans approved and maintained through compliance checks by the Sheriff’s Department.

Those plans vary depending on the operation but include background checks on owners and their employees, burglar alarms, exterior and interior cameras, on-site security guards, panic buttons and plans in place in the event of takeover-style robberies or other crimes.

Michael O’Leary, owner of Medallion Wellness, a dispensary on north McHenry Avenue, has a surveillance system that is linked to a 24-hour crime center from which a dispatcher can send a security guard, sound an alarm and speak directly to the suspect.

In addition to keeping his business free from crime, he said it’s stopped a break-in at a neighboring business and interrupted a suspect who was trying to siphon gas from a vehicle in the parking lot.

His dispensary also has a panic button, as does the cultivation site from which he purchases product.

Bob Blink, owner of Lyfted Farms, currently is producing about 2,000 pounds of cannabis a year and continuing to expand in warehouses on Jerusalem Court.

Blink said he accidentally pushed the panic button shortly after it was installed and four sheriff’s deputies were at his business within five minutes.

“Illegal operations are completely clandestine so (when there’s) some sort of security event, they are on their own. They can’t pick up the phone and call the local sheriff’s office to come help them,” said Zach Drivon, an attorney who represents both O’Leary and Blink.

The businessmen, both Modesto natives, first started operating nonprofit medicinal cannabis collectives in 2015. Drivon said they were integral in passing a measure in Stockton that lifted the ban on medical cannabis dispensaries and cultivation and worked with Stanislaus County to fund a poll that showed majority support for cannabis businesses here. They also have been transparent with county officials who asked to tour their businesses.

So when the county started reviewing 33 applications for cannabis permits last year, O’Leary and Blink were at the front of the pack. They received the first cultivation and dispensary permits in the county in February and April, respectively.

Since then the county has issued permits to three other businesses for cultivation and four more businesses are going through the approval process now for nurseries, cultivation, distribution and retail, said Tera Chumley, senior management consultant for Stanislaus County.

The county has a cap of 61 cannabis permits, only seven of which can be dispensaries.

To grow cannabis, Blink not only is regulated by the Sheriff’s Department but by the state Water Resources Control Board and the County Agricultural Commissioner, which ensure the businesses are not polluting the water or using harmful pesticides.

The rooms are cleaned with bleach between each harvest.

He uses only organic pesticides that are so mild the plant must be treated weekly. There are other pesticides that will kill any insect with one treatment per harvest, O’Leary said, but they are dangerous to humans and become carcinogenic when heated and inhaled, which is how most people consume cannabis.

Mitchell said he sees those toxic pesticides being used at illegal grows and marijuana being grown in moldy, unsanitary conditions that can be harmful to the consumer and the environment.

Samples are tested from every strain of cannabis in every quarterly harvest at Lyfted Farms. A lab tests for 66 types of pesticides, as well as microbials (bacteria), toxins from mold and heavy metals like arsenic and lead. If any were ever detected (none have been), the batch would be destroyed.

Blink also tags every plant with a unique number that is entered into the state’s track and trade system.

“In the cannabis market, as long as your flower looks pretty and smells pretty, you’re going to give it a shot, ” he said.

As a result, many consumers are still willing to purchase cannabis on the black market because it costs half of what you’d pay in a dispensary. The taxes alone are 33 percent, O’Leary said.

“We as legal operators have shelled out hundreds of thousands of dollars to become compliant and it is hard for us to even recoup what we put in when there is such a lucrative black market out here right now,” O’Leary said.

Mitchell said the money that is coming in from the community benefit fee will soon fund two new deputies to join the SIU to combat illegal operations and conduct compliance checks on the legal businesses.

“There is more of a focus now because the county is getting pressure from these businesses … for us to go out and (eradicate) the illegal grows,” he said

Still, for now their efforts to fight illegal grows are “barely scratching the surface.” They take one down and another pops up, Mitchell said.

“Not only is the black market undermining the price of cannabis for the legal operators but it’s detracting from the best interest of the community, the health, safety and welfare of the general public,” Drivon said. “It only makes sense from a policy perspective to control this market, to control this agricultural commodity.”

Posted by Arthur Christopher Schaper at 7:53 AM