Cudahy, California's latest councilmember installation was a lot of fun.

And it got really heated, too.

He was really mad to see us there, convinced that he had chased us away.

During our set up in the front row, we could hear him yelling at us, telling us to go away:


You can hear him in the background crowing about how Raul is a "man-baby."

Do you agree with that after watching this video?

He and his partner in crime, who claims that We the People Rising have been saying racist things about them on YouTube, kept chanting about how I got "arrested" in Culver City.

Of course, Grindall61 set them straight on the facts, not that anyone cared!

And why is she pushing for money for Meals on Wheels?

Doesn't she have a job?

Oh, but the heated hate that Alan Garcia threw at others was too much to ignore.

He and Adolfo Varas, the openly gay, Millennial, feminists (blah, blah, blah) Democrat got into it really heavy.

Alan Garcia offered to kiss Varas to prove that he was not a homophobe:

Alan Garcia went full-tilt SJW just to prove that he was not homophobic.

He even told me "I think Adolfo's cute!"

This madness has engulfed everyone on the Left. They are so determined to prove that they are not bigoted, racist, homophobic, Islamophobic etc that they will humiliate themselves in any way possible.

Check out what Cristian Markovich shared with a concerned citizen in the region: 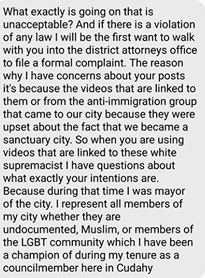 How many Muslisms even live in Cudahy?

And as for "Gays", would someone please explain why this city council is going out of its way to push against traditional Hispanic family values?

What is all this?

It's pretty sad, and REALLY funny at the same time.

Garcia kept talking about "boogers" running out of my nose!

Or maybe he was picking his nose ... 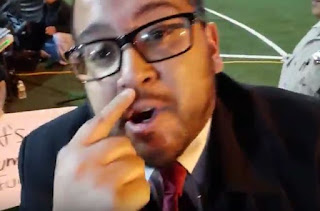 He asked me about tasers.

This guy was completely unhinged.

Then I called out Alan Garcia on his double-standard.

He went after me for not living in the city of Cudahy ...

But he does not live in Cudahy, either! He lives in South Gate. Alan really went nuts over that.

I confronted Chris Garcia briefly, as he was hiding behind his mother. I asked him three times to explain why he called me and my friends "white supremacists" even though Chanel Temple is black and Raul Rodriguez is one of Mexican descent.

How could he justify saying such hateful things, but instead started parroting the lies of Alan Garcia and the girl on his side. "Why did you get arrested?" That's pretty pathetic.

Alan Garia hit me twice, blocking me from confronting Garcia.

Then he got in my way a second time.

Cudahy residents were not having this. Marco Covarrubias told Alan to leave them all alone

Then a sherff's deputy crowded him to hold Alan back: 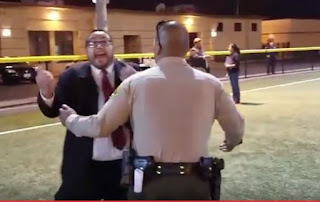 Alan is not a well-adjusted young man at this point.

There are severe consequences for allying oneself with corruption and lawlessness. It is indefensible, and those who stand for what is right will never back down!