You have to see it to believe it. 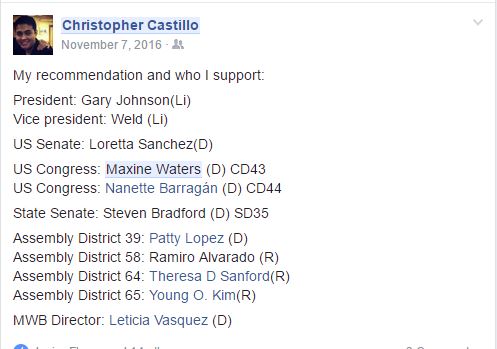 Then it just gets just plain stupid: 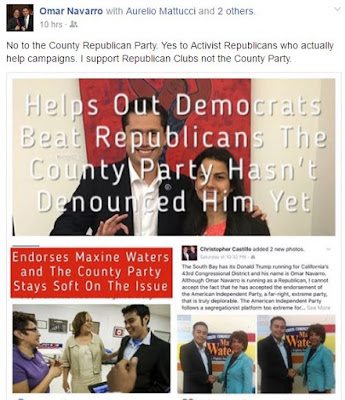 Where was the denunciation against these traitors?

Castillo is an advocate for the Republican Hispanic Assembly in the state of California.

Then nothing was done about them!

Aminoff pressured me earlier last year to allow Castillo to speak at the Beach Cities Republicans, even though Castillo was a liberal GOP and was by then colluding with the corrupt John Paul Tabakian.

What is the matter with these people? Don't they want to Make California Great Again?

The county "leadership" supports allowing liberal "progressive" Republicans to support Democrats, including a representative for the National Hispanic Republican Assembly ... but pulled the charter for the Beach Cities Republicans for allowing a Libertarian candidate to speak at the club.

Let's face the truth. They didn't like our clubs activism. They did not like that we were producing results and stirring up controversy. The truth is it's time for conservatives to double down and stand their ground on principle, rather than caving to the culture.

Anyone who is too cowardly to fight, needs to step down and go away.
Posted by Arthur Christopher Schaper at 12:06 AM