LA Times Reports on We the People Rising at LAX Protests

We the People Rising made all the difference at the January 29, 2017 Counter-Protest at LAX!

Even though there were thousands upon thousands of left-wing anti-Trumpers, the press came to us and pressed on us to know why we were there, and we were unafraid to Stump for Trump!

From the Los Angeles Times:

Roughly a dozen counter-protesters popped up on the street across from the Bradley terminal, holding signs that said, "X-treme Vetting" and "Keep Refugees Out," saying they were tired of the flow of illegal immigrants into the U.S. that they believe jeopardizes the safety of American citizens.

Chanell Temple, 63, of Los Angeles said she was sick of watching immigrants in the country illegally "steal" benefits and services from American citizens, specifically veterans and homeless persons who need aid. 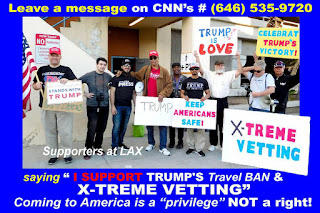 "They are coming here and taking everything away," said Temple, a former bookkeeper who said she lost her job and healthcare after she was fired for an inability to speak Spanish.

Asked what she thought about reports of green card holders, who are legal residents of the U.S., being detained, she said those reports were "lies."

Raul Rodriguez Jr., the coordinator of a group called America First Latinos, said he was concerned about what he believes is a surge in crimes committed against Americans by immigrants in the country illegally.

"They are lawbreakers. They have violated federal law and they need to be deported."

Way to go, We the People!


Los Angeles police officers and airport officers have established two lines at the airport, seemingly controlling foot traffic and keeping people from entering the street in front of the international terminal.

A few officers could be seen wearing riot helmets, and most of the officers seemed to be situated near a group of pro-Trump demonstrators. The group had been surrounded by demonstrators protesting the detentions but police separated the groups.

Don't believe how hostile and abusive the anti-Trump hatemongers became?

Check out this video and see for yourself!

Email ThisBlogThis!Share to TwitterShare to FacebookShare to Pinterest
Labels: LAX, Pro-Trump, protesters, We the People Rising