The Los Angeles Times had an interesting story about Huntington Park today ...

Karina Macias said she saw a business opportunity shortly after being elected to the Huntington Park City Council.

She decided to become a political consultant and parlay her connections throughout the community to help raise campaign contributions for other aspiring candidates.

"Parlay her connections"? How about calling it what it is? Influence peddling!

So far, she’s had only one client, raising $25,000 for a state Assembly race in 2016. For her efforts, she said, she received a percentage of the contributions raised, which totaled about $6,800 in commission.

Several of the contributions came from businesses — or people associated with them — who were awarded city contracts approved by Macias and her council colleagues, according to a Times review of campaign records and interviews.

How many times have I been writing about this?

How many times have other residents and activists working in and around the city have blasted this corrupt city council?

In one case, Macias voted in favor of a city contract for a bus company that Huntington Park’s then-finance director complained was “completely inappropriate” because the deal short-changed city taxpayers.

Yes, it was inappropriate because it ended up costing the city more money.

Macias, who is running for reelection in the March council race, denied that contributions she raised as a political consultant influenced her decisions on awarding city contracts to those same contributors.

Wow! And Mexico has a big beautiful wall they want to sell us in Gualajara/
“It’s not swaying my vote in any way,” Macias said. 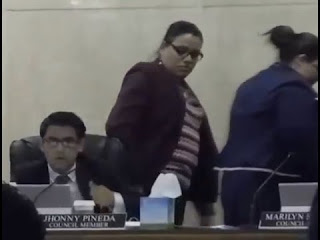 But some government watchdogs said her actions have the appearance of a conflict of interest and questioned whether she should have voted on contracts involving people who donated money to a campaign that paid her a percentage of those contributions.

“The question is, are these people really giving to the candidate or are they giving to her?” said Bob Stern, a government ethics expert and co-author of the Political Reform Act. “It’s the first time I’ve ever seen anything like this.”

It's a new scam. A  member of the Chamber of Commerce in Florence-Firestone told me about this.

Macias raised money for Efren Martinez, who opened a campaign fundraising committee to run for state Assembly in 2016. He had also raised money for a 2012 Assembly race. On both occasions, Martinez decided not to run. He now has a committee open to run in 2020.

Puppet Master Martinez is not running for office. He is running a corrupt machine politico who wants to run everyone else. 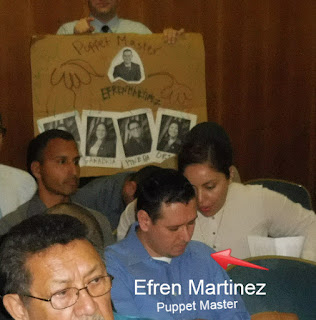 In 2015, Martinez’s campaign reported paying Macias for fundraising services, campaign filings show. Martinez’s financial disclosures show that among his donors was the company that received the city’s bus and dial-a-ride contracts, a legal services firm, towing contractors, and a vendor that provides street sweeping and bus stop maintenance.

However, that compensation was not based on commission. Stern said that  although it still raises conflict-of-interest concerns, they aren’t as serious.

In an interview with The Times, Macias confirmed several of the donors she raised money from.

Macias said she raised money from Erika Hernandez, wife of the general manager of the city’s bus and dial-a-ride contractor Metro Transit Services. Records show Hernandez donated $4,200 to Martinez’s campaign on May 29, 2015.

That month, Macias and the council majority voted to award Metro Transit the multimillion-dollar bus contract. A little over a year later, she voted to give the company a dial-a-ride contract worth more than $3 million.

Macias also voted for a contract amendment with the company that allowed it to lease new buses from the city. The five buses cost Huntington Park $260,000, but it leased them to Metro Transit Services for $100 a month per bus.

The city’s finance director wrote in an email to the city manager that the bus leases were far below market value and “completely inappropriate.”

Macias said she couldn’t recall other contributions from city contractors, or denied asking for them. The Times asked her for an example of a contribution she raised that was not associated with a city contractor. She couldn’t provide any and didn’t return phone calls following up on that request. 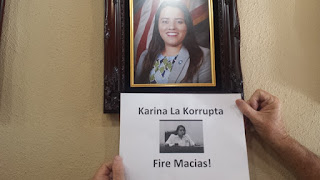 In the case of Nationwide Environmental Services, Macias made the motion in April to give the company a bus stop maintenance contract worth more than $111,000 over two other bidders for the contract.

Macias said she decided to get into the political fundraising business after her parents fell ill and she was forced to quit her day job to care for them. The consulting business is a way to make extra income, and she said she has ambitions to build a more successful company.

Sure she has ambitions -- to rip off everyone else and enrich herself.

She said she figured she could ask people she’s “gotten to know as a councilwoman” for the money. She said she told contractors she would be getting paid commissions for delivering the money, but she denied discussing city business with any of the contributors while asking them for money.

“That’s pretty much my approach to fundraising,” Macias said.

Martinez described Macias’ role differently. He said he initially made contact with all of the contributors and got them to commit to contributions. But, the most difficult part of fundraising is collecting on those commitments, so he dispatched Macias to be the “bill collector.”

Macias’ job was to make sure those people wrote the checks and to collect them, Martinez said. She was paid a combination of commissions and salary for the work, he said.

In either case, the fundraising arrangement is problematic, government watchdogs say.

Problematic? How about criminal?!

Jessica Levinson, a lecturer at Loyola Law School and member of the Los Angeles Ethics Commission, said the commissions give the appearance of a conflict of interest.

“I would say it’s a very unusual setup, and one that raises the specter of where her alliances are,” Levinson said. “It looks like what it might be, which is a kickback scheme, but not necessarily an illegal one.”

Karina La Korrupta is using her connections to get rich, and it is shameful that she is hiding behind her ill parents to justify her corruption. What would her father and  mother say to such perversity?
Posted by Arthur Christopher Schaper at 11:47 AM