This message was sent with high importance.

This is another important victory in Southern California.   Sanctuary Cities and and sanctuary policies are illegal and anti-American, and they are now being rejected in many cities nationwide, even here in Mexifornia.

“Welcoming City” is  just a new term for Sanctuary City that the open border liberals have come up with to try to convince more cities to welcome, protect, and give city/taxpayer services and resources to illegal aliens and unvetted Muslim refugees, without the stigma of being labelled as a “sanctuary city”, which the Trump Administration has outlawed and promised to crack down on soon. 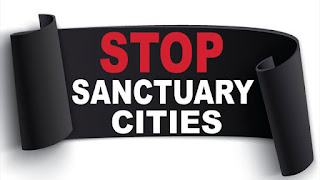 While three cities in San Diego County declared themselves “Welcoming Cities” in early 2016 (Encinitas, Solana Beach, and Lemon Grove), before the public even knew what was going on, no more cities have declared since last summer, and two cities (Imperial Beach a now National City), have formally rejected resolutions from the radical Mexican and Muslim (CAIR) special interest groups in the past 6 months.

At National City’s Feb. 7 council meeting, the two La Raza Latino council members demanded that the mayor and other two councilmen vote for their Welcoming City resolution.  They even brought in 43 speakers to beg for their sanctuary policies for the thousands of illegal aliens in National City.  They failed!  Mayor Ron Morrison deleted the sanctuary policy language from their resolution and then forced it back on the two Latinos who then voted no on it, but the new non-welcoming resolution passed 3-2.  Brilliant move, Mayor Morrison!

By the way, the population of National City is 40% immigrants/refugees.  25,000 foreign born residents total, plus all their dual citizen anchor babies.  But on Feb. 7th, the Americans were represented and prevailed!

Keep up the fights in your neck of the woods.  The People and many politicians are waking up to the fact that we will be living under the rule of law for at least the next 4 years and city, county, and state leaders that try to protect illegal aliens will be held accountable for their crimes.  America First!

National City Resolution not a Welcoming One
http://www.sandiegouniontribune.com/communities/south-county/sd-me-southcounty-0215-story.html

The subject of ‘welcoming city’ has turned thorny for some municipalities.… …But in his rewrite, Morrison removed the sentence:  “City employees will serve all residents, and city services will be accessible to all residents, regardless of immigration status.”…..

Contact info for the other council members here:
http://www.nationalcityca.gov/city-government/mayor-city-council

Councilmen Jerry Cano and Albert Mendivil voted against the sanctuary language and should be commended.

Councilwomen Mona Rios and Alejandra Sotelo-Solis pushed for the sanctuary policies on behalf of La Raza groups and should be recalled for violation of their oaths of office.