I put my money where my mouth is,

When I found that US Senator Thom Tillis was experimenting with amnesty in league with border security and enforcement of our laws.

While Tillis’ legislation would increase border security, it would also grant amnesty, a type of immigration reform measure that Democrats have been demanding since the 1990s, as Breitbart Texas reported. 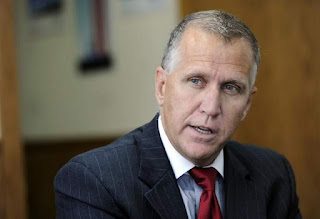 I called Tillis' office this morning.

The staffer put off my concerns about amnesty by telling me that Senator Tillis does not support amnesty.

He wants to grant "legal status" to illegal aliens in our country.

They are allowed to stay in the country, and do not have to fear deportation.

The argument that follows is that these illegal aliens will not be able to vote, and they will not have the other privileges which come with citizenship.

That will not last long.

This argument for legal status will create a more balkanized America, where residents with "legal status" will have no incentive to assimilate into the American culture. They can't become citizens, and they have even less of an incentive to leave the country and return to their home countries.

Legal status is even worse than granting full amnesty--and full amnesty is bad to the open border.

There is one legal status: citizenship.

There is one rule of law.

Our elected officials need to understand this, or they need to resign from office right now.

Contact US Senator Tillis and demand that he enforce our laws, and stop playing with amnesty: