The Issue is Not Islam-ISM, but Islam Itself

The conservative movement in the Los Angeles are needs to get a backbone. 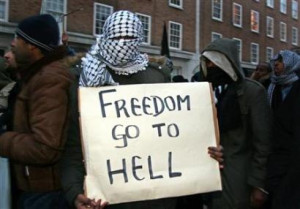 First of all, natural marriage and the family are worth fighting for.

Most conservatives in the Los Angeles area don't want to touch let alone confront the etiologies of homosexual conduct. They do not want to press on the public the harmful public health and private losses associated with the lifestyle.

This is wrong. Politics has to shift away from differences of opinion and the moral relativism of politicians who just want to get through from term to term.

I used to think that there was only so much that Republicans in blue states could do.

Now I realize that Republicans will face more failures if they do not stand up for all the values which matter. We do not have to run from the truth to win elections. In fact, if we refuse to stand for what is right, what is the point of winning any elections?

I respect the concept of picking one's fights, but to give up on issues that are essential to our culture and our country--that is a huge mistake!

Family is worth fighting for.

And yet, at least two well-known, erudite and influential conservatives refuse to state the plain obvious:

People are not born gay, and homosexuality is not a right.

In this debate with Perez Hilton, Dennis Prager refused to challenge the fundamental argument about homosexuality: that people are not born gay and that it's not an identity:

Prager really dropped an opportunity to challenge the concept of homosexuality and homosexual behavior as an identity or a genetic component.

C'mon, conservatives, let's tell the truth like it is.
.
When it comes to Islam, we are facing reticence to all out Islam as a dangerous cult.

Islam has a problem, and I am not saying this myself.

Former Muslims has announced that this political ideology is repugnant and dangerous to Western Values, including life as well as liberty and property.

Check out the remarks from Congressman Louie Gohmert:

Check out this Prager U video:

It's not radical Islam vs. mainstream Islam

It's not Islamism (?) whatever that means vs. Islam

Check out the remarks from the Mosab Yousef, the son of Hamas' founder:

Check out what these former Muslims have shared:

If these former Muslims are unafraid to run away from the religious totalitarianism of Islam, then we in the United States and throughout the world need to stand up for the truth.