I have wanted to write about the retirement and disappearance of former Congressman Henry Waxman.

I could not wait for this man to leave Congress.

Conservatives in the South Bay along with other grassroots interest throughout the 33rd Congressional District did everything they could to stop Waxman. He has been an unwelcome Washington shill since he was elected in 1974.

After forty years of doing the bidding of large corporate interests and labor unions, while ignoring the best interests of the public and the rule of law written in the United States Constitution, it was time for Waxman to go. He was the epitome of well-connected cronyism.

His legislation helped bankrupt the United States Postal Service by reuiring the institution to pay ahead of time 75 years worth of benefits.

Yet throughout his tenure, Waxman liked to advertise himself as a champion for working people and the environment, while standing up to greedy capitalist raiders and corporate lobbyists

What's Henry the Taxman up to now?

Laughing out loud? You should be!

Forward.com wrote a laughable tribute for the former Congressman:


When Henry Waxman announced in January of 2014 that he would retire from Congress after 40 years of service, he was rightly hailed as one of the most influential liberals, and one of the most skilled legislators, of his generation. Waxman’s list of accomplishments is astonishing – expanding Medicaid, strengthening of the Clean Air Act, regulating the tobacco industry, funding AIDS research, investigating steroid use, instituting, passing healthcare reform, and much more.

I wonder how his freshmen and sophomore Democratic colleagues felt when they heard the liberal Dean of the House throw them under the bus?! Obamacare has pretty much ruined the Democratic Party, with Obama at the helm convinced that his super status to the base would be enough to overcome national resistance to his policies.

Forward was further unsparing in their criticism:


But of course there is a legitimate side to the concerns about politicians who spend so long in Washington – namely, that they “go native” and adapt themselves to its corrupt and cozy ecosystem, using all that experience and savvy to turn a wealth of political connections into just plain wealth.

And now comes the news that Waxman has registered as a lobbyist for telecommunications giant T-Mobile, as well as four groups that focus on healthcare and service employees. This was, as the Washington Examiner noted, a bit of a turnaround for the man that the Atlanta Journal-Constitution once called a “Lobbyist’s Nightmare.”

The article then called Waxman a "sell-out,"

But one has to ask: "Why is the Left surprised."

Democrats for the most part get into government with no recognition that power corrupts, and human nature is corruptible. Progressive naivete has led to bitter disappointments over and over. We need less federal intervention into our lives, and more opportunities for individual Americans to step out and make the most of their lives. We don't need the government coddling and babying adults so that they remain dependents. All of this has to stop. 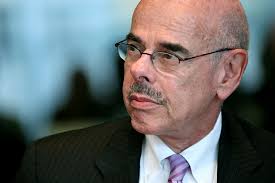 Henry Waxman wanted to created more children looking to the state as their parent and identity. All of that is perverse and wrong.

And there's more! Henry couldn't find any takers who would hire him!

Waxman’s rather pathetic sell-out is made even sadder by the fact that he’s actually been trying to sell out for a few months now but had trouble finding takers. In February, the National Law Journal reported that Waxman had shopped himself around to major DC law and lobbying firms without success, and had instead decided to join his son Michael’s firm, Waxman Strategies.

Poor Henry! After 40 years of scheming and stealing from taxpayers, of kowtowing to corporate interests in DC while pretending to be a progressive activist at home, nobody wants him anymore!