Huntington Park City Council: When Will You Replace the Portrait of Obama with President Trump?

They had canceled what would have been their January 3rd meeting.

This meeting was particularly corrupted because they changed the starting time for the meeting.

Normally, the meeting begins at 6pm.

That meeting was cancelled!

Then they announced a different meeting to start at 4pm.

Why? To ensure that fewer people arrive!

Now, here are my comments to the Huntington Park City Council: 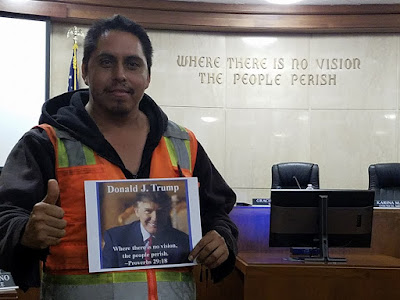 To the Huntington Park City Criminals:

First, I want to commend City Clerk Donna Schwartz for the notes which has taken of my comments during Public comment.

In last session’s minutes, I notice that she wrote the following:

I spoke about illegals – thank you. The illegal aliens on the city commissions are not “undocumented.”
Human beings are not “undocumented.” They are illegal if they are in this country illegally.
I also notice that she write down my final comments to the city council: “You’re Fired!”
I do indeed believe that the four of you who have supported the appointment of two illegal aliens to city commissions will be losing your jobs – and your freedom.

I look forward to the day when the city clerk writes in the minutes:

“Councilmembers Pineda, Sanabria, Macias, and Ortiz were hauled away in handcuffs for cutting deals with friends and family members, along with their brazen violation of federal law by appointing two illegal aliens to city commissions.”

Is Huntington Park a sanctuary city?

The city council majority claims that Huntington Park is not, and yet they have brazenly appointed two illegal aliens to city commissions, when the two should have been turned over to ICE and deported. They are in violation of federal by being in this country, and they have “outed themselves” to the world at large.

Councilwoman Macias claims that Huntington Park is not a sanctuary city. Yet she claims that she wants to protect the people in this city who are in the city illegally.

Her pretense is easy to see through, and no one can really take her assurances seriously.
All of you are in quite a bind. Either you expose that you appointed the two illegals just to cover your other misdeeds, or you go forward with your lawlessness in the name of social protest and officially acknowledge that Huntington Park is a sanctuary city.

Either way, you endanger the city’s federal funding – and you endanger your liberty as private citizens as elected officials, breaking federal law. What a dilemma you face—of your own doing.
One more thing. Since President Donald Trump will be our next President, I want to know when you plan on removing that picture of Barack Obama downstairs and replacing it with a picture of President Donald Trump. 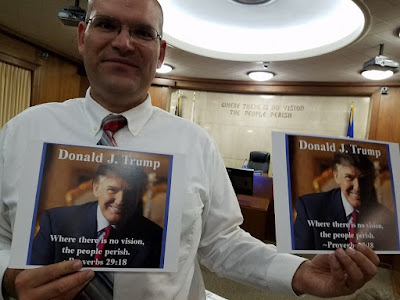 I want to be there for the unveiling. And if you need a picture of Donald Trump, I can provide you with one – this one has the city motto written on it: “Where there is no vision, the people perish.”

Just to explain the title a little further.

On the first floor of Huntington Park City Hall, all the elected officials who represent the city, from state assembly to federal Congressman, are hanging on the wall.

The President is also hanging on that wall.

Will the city council do the right thing and hang a portrait of Donald Trump on their wall -- or not?

We shall see.
Posted by Arthur Christopher Schaper at 5:44 PM