To explain the last-minute insanity of the heart-sick, butt-hurt Democratic Party and their regressive cohorts, I have to resort to another clan of self-absorbed misfits who lived their lives around quotidian nullities while portraying their existence, which is a ball of conflicts about nothing.

I'm talking about Seinfeld, of course. 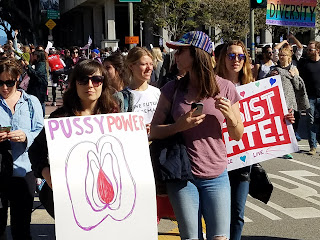 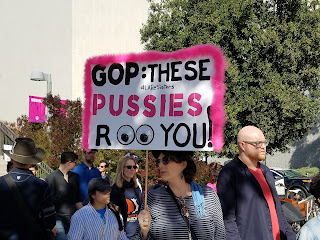 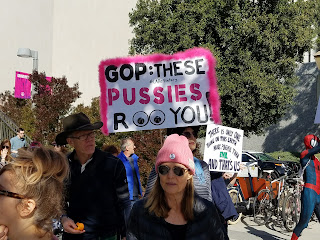 The show about Nothing was really a sitcom about everything, even man's interminable search for meaning in a world which he ruined through his own follies.

One episode comes to mind today as I ponder the LA Women's March which invaded (or penetrated?) Downtown Los Angeles on a cold and windy Saturday, January 21, 2017.

I am thinking of he episode in which Jerry has as new girlfriend. Beautiful, witty, lots of fun to be around, and be with. But he forgets her name. How awkward it would be for Jerry to admit to the new hot flame in his life that he forgot her name.

The only clue he has? Her name rhymes with a part of the female anatomy. First, the New York comic haggles with his fellow coffee-klatchers at the local diner.

Seinfeld rifles through the girlfriend's purse. Nothing, especially when she catches him red handed.

Eventually, she confronts him squarely "You don't know what my name is, do you?"

Back to the usually, failing suspects above.

As she storms out, Seinfeld rushes to the window and shout "Dolores!"

Bam, and he was connecting with "Clitoris" to finally figure it out.

Now, what does all the back and forth about female body parts have to do with the LA Women's march?

There were remakes and cut-outs of the female anatomy, everywhere.

Women were dressed in larger than life versions of their vaginas. Forget Vagina Monologues. The whole protest against Donald Trump had turned into a "Vagina Cast of thousands."

Little cats and kittens adorned placards and posters as well. I had arrived in Downtown LA on a Saturday Morning because I intended to attend the first press conference for conservative Republican Los Angeles Mayoral candidate David Hernandez.

Instead, the private parts took over the public suare, and he couldn't make the case for his race.

But the trip wasn't a total one-night stand.

The whole liberal, left-wing, lunacy political front was bare naked for all to see that morning.

The feminist movement has turned itself into a delusional, laughable movement about ... nothing.
This is a joke. They are embarrassing themselves, all in the name of social protest. Didn't their mothers ever tell them to respect their own dignity, and that they ought to know better?

What were these women really protesting? They think that Donald Trump is the new face of the War on Women. No more abortions on demand, paid for We the Taxpayers.

Isn't true feminism about women taking responsibility for their own lives, and accepting the consequences for their actions? One set of protesters was wearing native American garb: "Workers rights, not war."

Don't they realize that Trump as a Republican has struck a near isolationist tone compared to the Bush family of the previous two GOP administrations? He is very much for workers, since business is booming once against and jobs are bouncing back into the United States. Even the uber-leftist AFL-CIO had to celebrate Trump pulling America out of the Trans Pacific Partnership.

These protesters (men and women) are nothing thinking with their minds. They are identifying with their privay parts. Maybe they should just get their heads out of their asses and pay attention for once!

No willingness to listen or learn. They were simply playing off one nasty, private conversation recorded by Billy Bush with Trump from twelve years ago. Where were they when Bill Clinton was putting his hands, mouth and everything else on "Women Everywhere"?

Where are they to protest Islam and its anti-woman core? Sharia law? Why not just kill every woman and get it over with? Rape culture? Look no further than Islamic countries, where the testimony of  a victim is already half that of a man, and requires four witnesses to count as reliable and confirmed.

Instead of fighting for Western Values, which esteem women as possessing the same natural rights and dignities of men, the crazy ladies and their Beta male partners ovulated into Pershing Square.

What a sad sight. One has to wonder what the first feminist, Susan B. Anthony would think of this parade of private parts. To make matters worse, the throngs (not thongs) of protesters did not even vote!

The true feminists of a century ago fought for the women's vote. Now, women have turned themselves into walking vaginas and vulvas. What pettiness, what vulgarity.

And a sure sign that this country dodged a bullet, and we know who is name is!
Posted by Arthur Christopher Schaper at 10:50 PM