Letter to Daily Breeze: Shame on Lieu and Waters

Congressman Ted Lieu (D-Torrance) is an officer in The United States Air Force.

He has an obligation to respect our President—yes, President!—Donald Trump.

For him to refuse to attend the inauguration, and to show nothing but contempt and dishonor for our Commander in chief, is insubordination.

He should be disciplined.

Why this double standard? 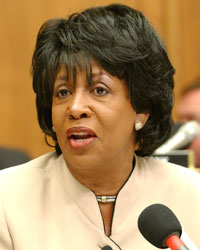 As for Congresswoman Maxine Waters, her resistance to Trump’s election victory—up to the tally of Electoral votes in the House of Representatives—was truly disgraceful. She repeatedly asked for a US Senator to challenge the electoral votes in key swing states. Even Vice President Joe Biden had to tell these arrogant Democrats: “It’s Over.”


I am ashamed of the two politicians who “represent” Torrance in Congress. They certainly do not represent me or respect the will of the people.
Posted by Arthur Christopher Schaper at 6:07 PM