What an exciting night it was in Claremont, California on Tuesday, January 24.

All these cranky SJWs filled up the entire city hall and spilled out into the steps at the front of the city hall: 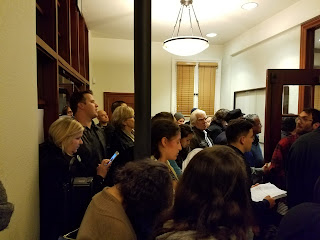 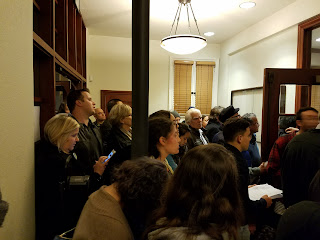 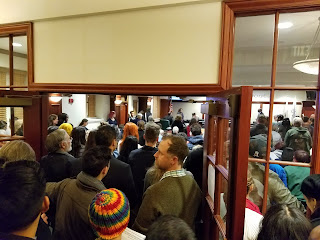 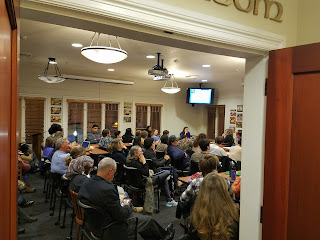 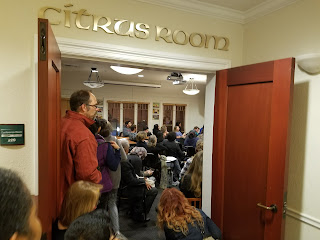 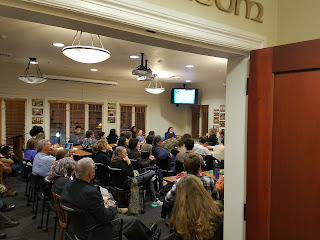 Here's the report from the Inland Valley Daily Bulletin, with my comments and an exposé against their failures.

CLAREMONT -- On the eve before President Donald J. Trump signed an executive order to build a border wall and another to pull funding from self-declared sanctuary cities, the City Council heard five hours of testimony, then narrowly agreed to reaffirm the city’s commitment to diversity and safeguard the civil rights, safety and dignity of all people.

In the wee hours of Wednesday, the vote was 3-1, with Councilman Corey Calaycay abstaining and Councilman Opanyi Nasiali voting no.

About 200 people packed council chambers, the lobby and an overflow room upstairs to share their opinions on the resolution, which stops short of declaring Claremont a “sanctuary city.”

It was packed alright!

I came 30 minutes before the meeting started, and the building was overflowing with people, mostlly college students.

I understand the sum to be closer to $1 million.

“To me, it doesn’t have anything to do with losing $500,000 or cost-benefit analysis as some have said to dissuade us,” Councilman Joe Lyons said. “It has to do with our moral and ethical obligation as representatives. That’s what Claremont is about and has been about. It’s one of the reasons many of us have moved to Claremont.”

The moral and ethical thing for the city to do? Uphold and defend federal law and abide by those laws. Cities are for citizens, not illegal aliens.

The discussion began in November when members of Pitzer College Student Senate began the process of asking Claremont be designated as a sanctuary city. A formal plea to the council was made at December council meeting.

So, a bunch of college students put pressure on the city council.

REALLY?! This is just sad. That alone is good reason to have them removed from office. The men elected to higher office are supposed to uphold the law and serve as examples for young people. Instead, we are witnessing a culture far more interested in pandering and placating arrogant, entitled college students rather than standing up to them.

Claremont officials, however, declined to take that route because the implications for a sanctuary city designation are not clear, Assistant City Manager Colin Tudor said Tuesday night.

Yes, they are clear. This kind of language is the weasel approach for not taking a stand for anything. They do indeed know the implications for choosing to disregard federal law. They just don't want to admit to the irate college cry-bullies that they will stand by their oath of office and defend the Constitution (or rather, their own jobs).

Tudor added it’s the Claremont Police Department’s practice to neither conduct immigration enforcement raids nor stop or detain anyone to determine his legal status.

The resolution comes as the City Council just two weeks ago voted to reinstate the Committee on Human Relations, which will be tasked with developing an ongoing public dialogue to address hate crimes and intolerance. It will work with the public to promote education and understanding among various groups and cultures in society.

How about hate and intolerance toward legal residents? That would be nice? How about tolerance for the rule of law in our country?

Several of the of the speakers, including Lyons, referenced the city’s history and how it ties to the decision to support the resolution. A predominately citrus industry, Claremont relied on an immigrant labor force to thrive.

Yes, but now we have an unprecedented 95 million people out of work!

They are looking for work, and they will do the jobs which the amnesty advocates claim "white people" will not do.

I confronted one of the older amnesty advocates on this issue at the outset of my arrival at city hall:

In casting his vote, Councilman Larry Schroeder, who participated in the Women’s March L.A. over the weekend, said he believes that Claremont has been a sanctuary city without the need of a formal title.

He doesn't want the formal title, because that would mean losing lots of federal dollars!

Guess what? Because the police force is strictly not cooperating with ICE, they are still a de facto sanctuary city.

Meanwhile, Calaycay’s said his abstention shouldn’t be seen as voting down the resolution. However, he doesn’t feel comfortable with “putting all of the residents on record” without truly knowing how their sentiments on the topic.

That much was evident Tuesday night during several tense moments when both sides tried to drown out speakers’ comments.

For one night, Claremont — known as the city of trees and Ph.D.s — was embroiled in the national debate about immigration.

Here's the section which featured my comments: 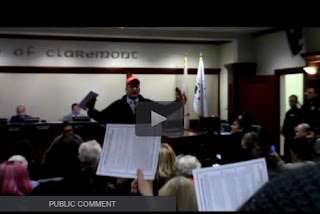 The crowded groaned in disapproval. As Schaper made his way back outside, he responded: “Suck it up buttercups; you lost, he won.” Some in the crowd countered by holding up signs that read, “no human being is illegal,” and “Sanctuary here.”

Here is a great photo taken by one of the newspaper photographers: 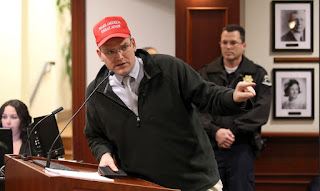 Of the 109 speakers at Tuesday’s meeting, most were in support of the resolution and many were students from the Claremont Colleges.

Most were in support because those individuals are college students who do not have jobs and who are not really learning anything in their classrooms.

Speaker after speaker, they shared stories which ranged from being sons and daughters of immigrants to teachers of undocumented students and their parents who were concerned about their future under Trump’s administration.

“This platform, the one that I stand at right now, is not a license to preach hate,” Pomona College student Ian Schafer said. “Instead of alternative facts, let’s talk about love, empathy and respect. Let’s talk about how immigrants pay more taxes than a demagogue named Donald Drumpf.”

Since when did demanding the rule of law become a form of hate?

This young people are not thinking. They are simply emoting.

Josue Pasillas, president of the Pitzer College Student Senate, said fellow students at Pitzer and friends of his are undocumented. He added that students come from around the world to study at the Claremont Colleges, making the college town home to many beliefs, religions and ethnicities.

“The current presidential administration has filled our community with fear and hate. As President Trump prepares to sign executive orders on immigration … here, in Claremont, we need to move forward, not backward. We need to stand up for our neighbors no matter what they look like,” he told the council.

I saw nothing but hate in the audience, from the college students.

Check out what I was put through in this video:

Notice how one bigoted lady gave me the middle finger.

Many called on the council to go a step further and enact an ordinance, one that can be legally binding.

Read the above passage again for yourself. They want to pass a legally binding ordinance which would allow illegal aliens to stay in the city of Claremont.

How much further does this insanity have to go before people hit bottom and wake up?

To keep the council meeting going and not be disrupted by clapping, the crowd would snap their fingers anytime they agreed with the speaker.

But the council also heard from residents from neighboring cities — and as far away as Huntington Beach — and members of Claremont-based We the People Rising, who were opposed to the city taking a stance or any move which could make them look like a sanctuary city. 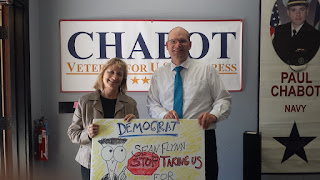 Many shared their concerns that the resolution could affect the safety of everyone and increase crime.

“We are a great nation because we are a nation of laws,” Robin Hvidston, with We the People and an Upland resident, said. “The law clearly states, you are to enter into the county legally, and you are to reside in it legally. This entire debate could have been eliminated with a simple statement: ‘Claremont is not a sanctuary city.’”

Hvidston, who earlier in the night was holding up a sign that read, “help our homeless,” told council members they should be focusing on those living on the streets.

Yes, indeed. There is a homelessness problem in municipalities throughout Los Angeles County.

I found a homeless person sleeping in front of the local bank two blocks down the street from the city hall!

All those rich college kids could spend some time and money helping the homeless, couldn't they?

But the meeting was also filled with some strange moments.

During public testimony, one speaker told the crowd she wasn’t racist because she owned a home in Mexico, which did little to impress the group. Instead, they scorned her.

Notice the disrespect for the college students. Who's the one acting like their privileged?

And there was an incident which occurred toward the end of the evening as Pedroza commended everyone for their honesty and decorum.

Two members of the public, from opposing views, were standing at the front of the chambers just off to the side of the dais, trying to outdo each other by holding their posters side by side and up in the air. The crowd, noticing the competition, began to laugh.

But so were other members of We the People Rising: 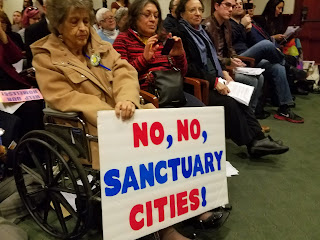 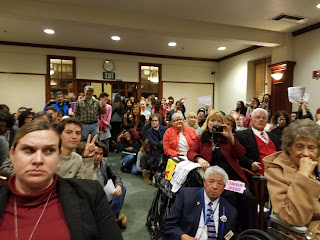 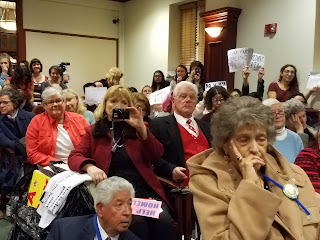 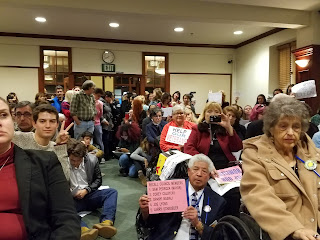 I think it's disheartening how desperate the secular left has become in our country.

Then again, it's a lot of fun pushing them into an intellectual corner to get answers from them about what they believe and why!
Posted by Arthur Christopher Schaper at 7:36 PM