To the Rialto City Council:

My name is Arthur Schaper, and I am a member of We the People Rising.

I live in Torrance, California, but I am aware that one of your city council members was attempt to enact a sanctuary city policy, a violation of federal law, which affects me and every citizen who lives in the United States of America.

City Councilman Rafael Trujillo organized this meeting in private but on public property. I was expecting to speak with him about why its wrong to enact such an immoral plot. Yet as soon as I an fellow citizens arrived on the scene, he started claiming that he was just going to listen to constituents. He was trying to hold a private meeting on public policy in a public facility all paid for by taxpayer dollars. 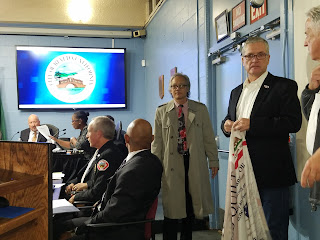 Now, here is what I was going to share with the Councilman on Friday December 30th, which I will share with you today.

I will speak about young Ruben Morfin.

He was a young boy, only 13 years old, who lived in Salinas, California. On his way home from school, walking to his grandmother’s house, an illegal alien gang member confronted him. When the illegal alien asked him where he was from, he said “I am an American.”

Then the illegal shot him in the back of the head—execution style. The doctor at the hospital told his mother Angie that half of her little boy’s brain was missing. Then Ruben passed away.  To this day, Angie lives a life sentence, because her little boy is dead, and even though the murderer was captured and sentenced. 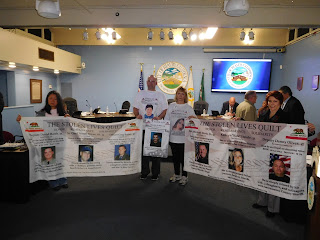 Every year on Ruben’s birthday, she has to remember that her son was murdered. Every Christmas, Ruben is not there. Ruben would not have died if our nation’s immigration laws had been enforced It will never be a crime for anyone in this country to say who they are. I am an American, and this country is for American citizens, and for immigrants, men and women who come here legally.

Because of sanctuary city policies which have allowed illegal aliens to roam our country without fear of law enforcement, there have been unnecessary deaths, more senseless murders.

Instead of enforcing the law in his city and this state, Councilman Trujillo made excuses, ran away from me and others, and then fled from city hall. He even attempted to scare away law-abiding citizens by calling the police including the police chief.

We will not tolerate the disregard for the rule of law in our country,  and in our state.
Councilman Trujillo, I have a question for you: “Since you support illegal immigration, since you support sanctuary cities for illegal aliens instead of citizens, what would you like to tell Angie Morfin, or Ruben’s aunt Lupe, who will never see her nephew again? That little boy is dead because of lawlessness which you support.

Mr. Trujillo what would you like to tell the parents of Marcello Bisarello? Are you saying that the lives of these two murdered Americans mean nothing?

To the Rialto City Council, I urge a motion of censure against Trujillo. To the residents of Rialto, I ask you to consider a recall effort against this corrupt “undocumented politician.”

As for your Mr. Trujillo, now that you can’t run away from you – I demand your resignation.