Because of Donald Trump's election, the California Democratic Supermajority is already worried for the future.

They had no idea that their progressive agenda would hit a brick wall (figuratively and literally) after the November 8th Election. After all, California has been reliably Democratic in Presidential Election since 1996.  From that point forward, Democrats have taken over more statewide and legislative seats.

With Election 2016, it was crystal clear that California has become a center-left state. Republicans plus concerned independents and conservative Democrats are worried about the drift of the once Golden State.

Now, it looks like the Democratic lawmakers are worried, because a true enforcer is in the White House. State Senator Ricardo Lara (D-Long Beach, Huntington Park) has thrown out a series of bills designed to counterattack the Trump agenda.

Check them out below:

This legislation is a second attempt from state senator Lara to end the private contracts between cities and detention centers for illegal aliens:


This bill would, commencing on January 1, 2019, prohibit a city, county, or city and county, or a local law enforcement agency from entering into, renewing, or extending the length of a contract with a private corporation, contractor, or vendor to detain immigrants in civil immigration proceedings for profit.

Illegal immigration is a crime, and illegal aliens are criminals. The fact is that private contracting is a cheaper and more efficient means for cities to hold illegal alien suspects and criminals until federal authorities arrive and deport them.

This Lara guy needs to be shut down or arrested. He is preaching and legislating treason!

He has submitted other legislation, but the good news is that he is so distracted with fighting Donald Trump he won't be able to do the damage that I had feared based on what he had tried to do last year: 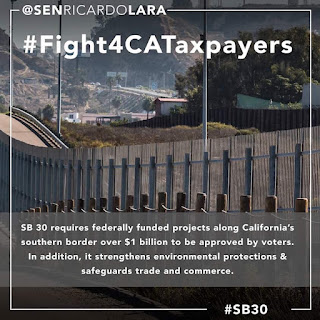 Existing law establishes the border between the United States and Mexico, which includes the southern border of California.

This bill would require any federally funded infrastructure project along California’s southern border that exceeds a cost of $1 billion to first be approved by a majority of the voters voting on the issue at a statewide general election. The bill also would make related findings and declarations.

Some critics have posited that this is a brilliantly wicked piece of legislation Of course the federal courts would challlenge it -- if it were passed--but the phalanx of liberal jurists at the Ninth Circuit would probably approve it.

I disagree. I believe that Lara's hand will get slapped down--again--just as it did with SB 1146. Federal law TRUMPS state law, and there is nothing that the State Senator can do about it.

If he is so concerned about federal construction along the California-Mexico border, then he should have run for Congress or the United States Senate.

Really, though. This legislation is a political stunt at its lowest. Very sad!

Existing law prohibits a state agency from including a question regarding an applicant‘s race, sex, marital status, or religion in any application form for employment.

This bill is to combat Donald Trump's "proposed Muslim registry", although there is no evidence, in the past or currently, which suggests that Trump would pursue such a policy.

Let's not forget that Lara and his fellow Democrats wanted to subdivide Asian categories into more specific numbers in order to track them and then turn them into government dependents or a victim class.

Asian advocates throughout the state opposed this perverse agenda, and yet the lawmakers refused t listen to them. Whatever happened to government of the people, for the people, and by the people?

With these three bills (and probably more to come), Lara is playing his own "Trump" card to shut down or stall the President's law-minded agenda.

What folly. Lara has a bad case of "Trump Derangement Syndrome", and it will certainly explode in his face. It's too bad the voters in SD-33 didn't tell him: "You're FIRED!"