Reject #NoBanNoWall Lie-- Trump Can and Must Protect Americans

The anti-social injustice warriors are at it again.

They are truly spoiled children in adult bodies, having never grown up or have never understood that in this life, there are dangers and perils which cannot be pushed aside for a false sense of "equity and fairness."

The truth is, President Donald Trump has every right to impose a ban on refugees or travelers from certain countries.

President Jimmy Carter imposed a ban on travelers from Iran.

Barack Obama did the same thing on refugees from Iraq.

It's time to call out the insane, thoughtless hypocrisy of the repressive, regressive secular left in this country. 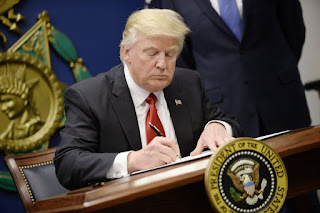 Our country has every right to secure borders, just like every other country in the world. The Vatican has a wall!

Hungary has set up a strong fence to keep out refugees from the Middle East. Eastern European nations as a whole have experienced what it's like to be overwhelmed by foreign invaders. From Mongols to Arabs, to the Ottoman Empire, and then Nazi Germany and the Soviet Union. We need to learn from their understanding of nationalism.

Having a strong respect for national sentiment is not racist, xenophobic, or hateful. Its necessary. We cannot have a free society without clear borders.

The United States has every right to a secure border, and we need a wall to ensure that.

Now, regarding all the hoopla about this "Muslim Ban."

This is not a ban on Muslims per se.

This ban is targeting countries where radical Muslims have either taken over or achieved an extensive political influence.

I am surprised that Saudi Arabia and Afghanistan are not on the list, but ultimately Trump's decision was not my call.

Also, all the belly-aching about "religious liberty" is rather moot and hypocritical coming out of the mouths of these left-wing protesters.

Where were they when churches, charities and small businesses did not want to prepare a wedding cake for a gay wedding? Their religious liberties were trampled on to appease a vocal, virulent minority.

What about the First Amendment rights of citizens? Why does the Left not care about the rights of Americans?

We need to stop being politically correct. We need to recognize that the Islamic ideology is militant and totalitarian in nature. The concept of "moderate Muslim" has been slowly but surely debunked, as in even the most stable and moderate of Islamic countries, Sharia law and all its anti-human rights are well-respected and even embraced.

Western values like Freedom of Speech, the Press, freedom of religion, respect for the rights of women, then end of brutal, arbitrary corporal punishment have no place or regard in Sharia law countries. Islam views the world though a desperate, Manichean world view. There are either lands of submission or lands of war.

The world at large needs to wake up and stop looking at Islam as some benign religion of peace. It is not. And all the ignorance or feigned reluctance to acknowledge this problem will only endanger more lives. Enough is enough.

By the way, the SJW cry-bullies need to understand that Trump has not banned anyone forever. Our national security personnel need to time and resources to assemble a proper, rigorous vetting process. This is a temporary ban for 90 days. 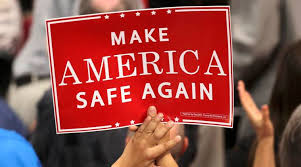 I agree with the comments from former Attorney General Mike Mukasey. Aliens do not enjoy the same rights as American citizens.

I also share the widespread recognition from Americans past and present. It is a privilege, not a right, for people to immigrate to the United States. This country's government owes its first allegiance ot the citizens of the United States, whether born or naturalized.

The rhetoric claiming "Muslim ban" is false and dangerous.

We should be grateful that finally, this country has a President who will honor and care for the safety and security of American people!

Posted by Arthur Christopher Schaper at 10:55 AM