If there is any city that needs better angels, it's Los Angeles, a massive municipality overrun with corruption, waste, incompetence ... and pandering to illegal immigration.

One of the most horrendous cases of illegal immigration that I experience took place in the Westlake District. An illegal alien transient named Johnny Sanchez was living in the abandoned warehouse. In retaliation against another squatter, Sanchez set the warehouse on fire.

He ended up murdering five people, four from Iowa, and one homeless man named DeAndre Mitchell, who rushed into to try and save the lives of the other four in the building.


This is only one of many horrific crimes committed in Los Angeles as a result of the immoral, devastating sanctuary city policy.

Instead of rescinding the policy and submitting to the federal government, pro-illegal mayor Eric Garcetti has sworn to double down on protecting the illegal aliens in the City of Angels, whatever the cost and whatever the price, even if it means the death of more Americans: 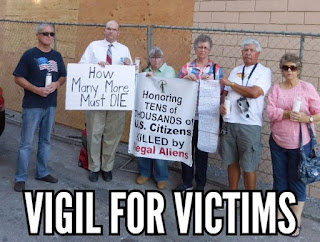 Unlike the current crop of elected officials in Los Angeles City and County, Mayoral Candidate David Hernandez vows to end this senseless violence and brazen lawlessness.

Illegal Alien Criminals will be turned over to Immigration Authorities.

As the City and County of Los Angeles scramble to divert millions of dollars of tax payer monies into a fund to defend illegal Alien Criminals, one candidate for Mayor of Los Angeles vows to take a different course of action.

David Hernandez, a longtime advocate for Legal Immigration, believes circumstances demand that we co-operate with the Federal Government in having Illegal Alien Criminals, who are in the City of Los Angeles, removed from our city.

The continuing dramatic increase in Violent Crime in Los Angeles, up nearly 40% since 2014, as well as the decrease in arrests and convictions during the same period, down almost 9%, clearly demonstrates that we, as a city, must use all resources at our disposal in combating the threat to Public Safety.

The California Trust Act, passed by Sacramento politicians, limits the actions of local law enforcement in holding Illegal Aliens who have been arrested for committing crimes. Hernandez believes we can and will work within the bounds of the Trust Act, and succeed in reducing the criminal element by as much as 10%, if not more, in the City of Los Angeles.

An American of Mexican descent ,running for Mayor of Los Angeles, Hernandez definitively states that this is strictly an issue of Public Safety, not one of race. Those who are in the city without documentation and have not committed any crimes need not be concerned.

But those who are in the City of Los Angeles without documentation and commit a Felony or a series of Misdemeanors will be dealt with to the fullest extent of the Law. They will be made available to Immigration Services in an effort to help preserve Public Safety in all communities in Los Angeles.

With the passage of State Propositions such as 47 and 57, and Realignment efforts such as AB109, in addition to the number of former Felons being released into our communities, we have seen a sky rocketing number of property crimes and homelessness in Los Angeles.

Given the overcrowding in county jails, we must make room in our prison system to house criminals legally here in the United States. As no more detainment facilities are being built, we must take advantage of the avenues available to us in assisting those tasked with our Public Safety.

Hernandez states that, “No normal person would want anyone with a track record of committing crimes living in their community, if they can help it.”