They rushed through hasty and arbitrary  charges against us, when previous BCR Presidents had violated the same by-laws and nothing was done to them.

They had non-Republicans speaking at their clubs, and the RPLAC leadership never bothered to say anything.

But before that, Jason Maruca, the over-paid executive director of the RPLAC had told me that I could personally endorsed non-Republicans, but could not endorse them in my capacity as President of the Beach Cities Republicans.

Are you confused? I know that I am.

The Central Committee Chairwoman Janice Webb was trying to get rid of me as far back as August. Why wasn't she raising money and registering more Republicans instead?

Have these people forgotten why they are in a central committee in the first place?

So, the Beach Cities Republicans is a succesful club with a growing membership and great guests.

And RPLAC's response? Revocation of our charter.

The this eblast was released to the public: 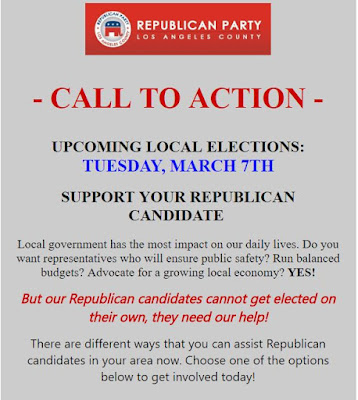 And here's the entire text of the eblast:

The Beach Cities Republicans served as a huge repository of volunteers.

But they just pushed aside and said "We don't need you or want you!"