The Corrupt and Unprincipled Hawaii RINOs--Conservatives Fight Back (Lessons for California?)

And I thought that we had it bad here in California.

The Republican (RINO) Party of Los Angeles County pulled the charter for the largest and most successful volunteer group in the county.

What were they thinking? They were essentially straining over a gnat, looking for any petty excuse to get rid of us because our group was speaking out, confronting the culture, and doing stuff.

RINO-PLAC lives off of welfare payments from a wealthy donor or too, including big money from the liberal-leaning "New Majority" headed by Andy "Give you nothing" Gharakani.

The corurption, the backroom dealing, the weakness, the cowardice, the unwilling to stand for anything or distinguishing themselves from Democrats, has become a slow hallmark of California Republicans.

But this internal perversion and turmoil is routine in Hawaii. The Republican Party is not just weak, its leaders is intentionally self-defeating!

Check out this eblast from the Hawaii Republican Assembly: 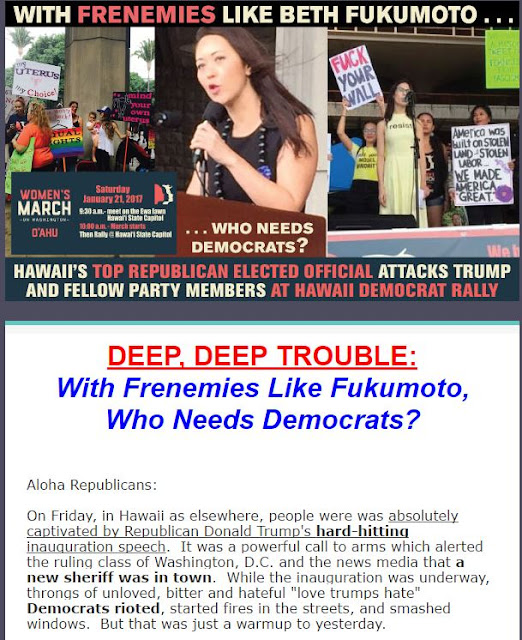 
Our state GOP hired a Democrat union lawyer in an ill-advised attempt to shut us [Hawaii Republican Assembly] down.  Fortunately, we were able to get Reince Priebus to tell the RINO's at the local party to back off.  Consider contacting the National Federation of Republican Assemblies about starting a chapter!  Best wishes . . .

We need conservatives who FIGHT.

Too many Republican Assemblies are looking to make nice or accomodate Democratic dominance in the state of California, and elsewhere, I fear. They need to accept that they have to fight against then change leadership in their state party.

Guess what? Conservative Republicans in Hawaii understand this dynamic. They have even laid out three clear steps to Make Hawaii Great Again:

The same applies to California, Oregon, and any other blue state where a culture of Democratic dominance, dependence, and degradation has become the norm.

Let these comments from the Grassroots Institute provide more fuel for political thought:

Imagine a football game in which there is only one team playing. Instead of seeing dazzling plays, the entire game is spent watching that one team sprint down the field and score over and over again. The winning team might glory in the score, but for the crowd, there’s an eerie feeling that something is missing.

That’s exactly what I felt as I sat on the Senate floor for the opening day of the Hawaii State Legislature.

There is no game, because there are no Republicans at all. It is a unanimous Democratic legislature.

This is beyond unthinkable. But it's happening in Hawaii. If people thought that Rhode Island or Massachusetts had it bad, just look at the Aloha State, which is saying "Aloha" to any kind of fiscal discipline or government accountability.

As the Senate president continued, he spoke about his support for the Honolulu rail project, adding that we are sure to have enough money to run the state because of the good planning the Senate has done in years past. He promised that although money is going to be tight this year, we will still, “take care of everyone in Hawaii.”

It was a speech that begged for criticism and another viewpoint–on rail, on fiscal responsibility, on spending, and more–but there was none to be had. I was struck by the sheer silence of it. There was no minority response to Senator Kouchi’s speech because there is no minority.

Then comes the deep dread of what will follow:

I can’t help but think back to the words of Lord Acton, who famously noted that, “All power tends to corrupt. Absolute power corrupts absolutely.” Knowing that, why aren’t we more worried about handing so much power to one political party in our state? Why haven’t more citizens made the connection between Acton’s dictum and the corruption they take for granted as a fact of state government?

There is no marketplace or true exchange of ideas. Nothing. Hawaii has turned into a dysfunctional welfare state where loafers, lawbreakers, and total losers dominate the massive voter spread. Republicans have refused to make their case or shape the culture. Instead, they want to accommodate the destruction. California Republicans need to realize that big money to keep a shell of a Republican Party open and operational is a big bust. Perhaps it's time for some fighting back spirit. What the Hawaii Republican Assembly has been doing is so impressive and inspiring. They blast liberal Republicans and Democrats. They demand principled action and accountability from their members.

They are also not afraid to demand that heads roll for rampant failure, just like empty coconuts off a dying tree.

What indeed can Republican conservatives learn from HIRA?

Plenty! (More to follow)
Posted by Arthur Christopher Schaper at 12:07 AM