Why the Pro-Family Movement Fails to Stop Some Bad Bills

The home group for MassResistance has developed an incredible track record for stopping really bad legislation. Regressive leftists have not only pushed every facet of society into a corner, they are determined to remove every reference of the Deity and Judeo-Christian values from the statewide culture. Is anyone surprised that Democrats are not going to uit in their mad dash to destroy our culture through cultural Marxism, followed by massive infusions of the state into our daily lives?

MassResistance has stopped the ban on reparative therapy for minors.

They also blocked legislation which would allow pregnant minors to get an abortion without telling their parents.

The only bill they failed to stop was the transgender bathroom bill.


We tried as hard as we could to stop it. We had activists going up and down the halls of the State House with aggressive talking points and literature that did not pull punches. We seemed to be making good progress.

But our efforts were overshadowed by the compromises, ineptness, and bad strategies of the well-funded mainstream pro-family movement who stepped in, and the pro-family legislators who followed their lead.

It pains us to say this because they are good, well-meaning people. But in the floor debates and in interviews in the mainstream press, the “pro-family” position was that accepting “transgenderism” is not a problem. That is, public transgender behavior is not a mental health issue, is not a perversion, is not anti-Christian, and is not anti-scientific. Our problem, they said, is that it allows a “likely predator in the bathroom” and is a “privacy” issue. At some level this may be true, but it’s ultimately a losing argument. The LGBT movement got a free ride on the real issues. And they pushed it hard in the State House.

As long as pro-family forces refuse to stress the underlying LIE about transgenderism, homosexuality, etc. there will be no real recourse to stop the LGBT onslaught. As long as pro-family forces refuse to announce to the world that the LBGT Empreror (or drag ueen?) has no clothes, i.e. has no validity to its demands for civil rights and special treatment, the forces for good in our culture will continue to fail.

The well-funded pro-familly groups caved. What is it with them? They probably advance their cause by raising lots of money. As soon as the left-wing attacks break forth, and the sense of shame creeps over the pro-family movement, then they start backing off and try to hide behind public safety arguments. They want to portray themselves as nice and compassionate.

If they wanted to show themselves as loving, they would speak the truth and not back away from stating the obvious, that transgenderism is a mental disorder, and homosexuality as an emotional problem which can be healed.

Ronald Reagan was not afraid to call the Soviet Union "The Evil Empire." When the 40th President framed the Cold War in terms of clear moral absolutes, it became easier to motivate public opinion against Communist Russia.

Pro-family activists, conservatives, Republicans of any sense or strength need to reclaim this moral high ground. Making nice or compromising with evil ... is still evil. Abiding by and tolerating lies means that we are in turn lying.

The same caving and comprising underlined why conservatives were unable to fully stop SB 1146:


Our MassResistance affiliate in Nebraska, Nebraskans for Founders’ Values, also had great success this past year stopping bills in the Nebraska Legislature. And as we’ve reported, the only reason that California MassResistance wasn’t able to stop the bill there targeting Christian colleges was that several of the colleges themselves caved in to a “compromise” that was no compromise at all. In California, the other side will be back next year, and so will we!

It's worth noting that well-connected activists, social media, as well as larger donors pushed hard to get the worst parts out of the bill: limitations on Title IX exemptions; removal of legal (lawsuit) remedies; mandatory reporting following expulsion of students who do not meet the moral code of college campuses. In fact, the federal analysis forced the bill's sponsor to back off considerably on key issues! 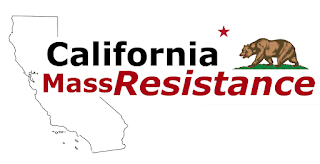 The larger Christian colleges had an incredible degree of power in their hands, but instead of doubling down and demanding the full destruction of the bill, they caved to allow a mandatory reporting requirement.

It's time for the pro-family movement to give up this idea of being "nice".

We are not loving anyone if we tolerate sin and destruction. There is a generation of young people right now that do not think it terms of life and death, right and wrong. Their single criterion is "eual or uneual".

That calculus is communistic, destructive, and misguided.

If we stop bad bills, it won't be on account of the confrontational groups like MassResistance, the quick and easy recourses of larger lobbying firms that won't to end conflict rather than stop the insanity and deceit of the Left.
Posted by Arthur Christopher Schaper at 7:23 PM