MassResistance: How to Kill Bad Bills at the State Legislature

Helping lead the charge in state legislatures across the country 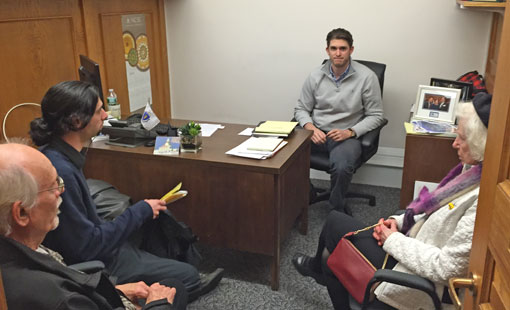 A group of MassResistance activists telling it like it is, in a State Rep's office in the Massachusetts State House.
This past year the LGBT and Planned Parenthood lobbies continued to file radical, anti-family legislation in state legislatures across the country. They have become even more emboldened in the wake of the “gay marriage” Supreme Court ruling. Unfortunately, they’ve been successful in too many states.
But in Massachusetts, MassResistance was a major force in stopping some truly horrible bills in the 2015-2016 legislative session.
The only major LGBT bill that got passed was the transgender “bathroom” bill. In our opinion, that was due to a terrible and feckless strategy by the pro-family establishment (see below).
Around the country, MassResistance helps pro-family people confront their state legislators to keep bad anti-family bills from passing. Fighting against the well-funded LGBT and Planned Parenthood lobbies isn’t easy. But we’ve been doing it for many years.
Our approach for success is not complicated: (1) Be aggressive, not wimpy. (2) Don’t compromise on the truth or on your principles. (3) Ignore what the mainstream pro-family groups do, as they often make fatal concessions to please their wary donors and the biased media.

Here are the major anti-family bills that were filed in Massachusetts, and what we did to stop them:

The LGBT movement is very aggressively pushing this bill in dozens of states. It would ban all professional counseling to youth on unwanted homosexuality or transgender issues. It’s a very cruel bill. Many youths have been sexually molested and desperately want and need help.
What MassResistance did:
We worked with pro-family activists from around the country who came to testify at the public hearing. We made a videos of the pro-family testimony, and also of the outrageous testimony by LGBT activists. Then we lobbied very aggressively in the State House and didn’t pull punches about the harm this bill would cause children. (Here's what we handed out.)
Still, the LGBT used its lobbying skills to get it out of committee and onto the floor of the House on Jan. 29, 2016. We immediately got the GOP leadership (and a few friendly high ranking Democrats) to use parliamentary techniques to stall it until the end of the session. Luckily, that worked!
Important MassResistance links on fighting H97:
About the anti-therapy bill H97
Courageous pro-family testimony at public hearing
Outrageous LGBT lobby testimony at public hearing
Lobbying in State House to stop H97
Bill H97 stalled in Mass. House
MassResistance VIDEO: Nothing but Lies - Absurd LGBT testimony pushing their 'anti-therapy' bill. (1 min 58 sec.)

This was Planned Parenthood’s major legislative goal for the session. This bill would require any school “sex-ed” program to use Planned Parenthood’s radical content on sexuality, homosexuality, abortion, and other topics. It is a nightmare. Currently, schools can design their own programs. In addition to that, the bill would water down the Parental Notification Law to make it harder for parents to find out what their kids are being taught.
What MassResistance did:
In previous years we had stopped this bill in committee, so we knew the drill. But this time it got out of committee and went right to the Senate in November, 2015. The Senate has several rabid pro-LGBT/Planned Parenthood Democrats who pushed this hard. Despite a good fight by GOP senators, the Senate passed it on Nov. 18. (See our report here.)
The bill then went to the House Ways and Means Committee. MassResistance lobbied that committee very hard. We described the horrors this would bring to children. They were pretty shocked, and sat on the bill until the end of this session (end of Dec. 2016).

Laws regarding public behavior were originally rooted in biblical morality and kept society intact. Massachusetts law still makes sodomy and homosexuality illegal and specifically bans “the abominable and detestable crime against nature with mankind or with a beast.” There are a handful of other laws still on the books related to adultery, lewd behavior, providing an abortion, allowing a restaurant or bar to allow prostitution or illicit behavior, etc.  Every session the “progressive” delegation files one or more bills to repeal these.
What MassResistance did:
This session MassResistance lobbied the Judiciary Committee, where the bill was originally filed. But this year it got out of committee and on June 20, 2016, made it to the second reading House floor. But then it stalled and never moved forward. We have a feeling that one of the Democrats we lobbied did something.
But it didn’t end there. The House’s inaction angered the ACLU and its allies. So they decided to try an “end around” strategy. In October 2016, they persuaded the Massachusetts Sentencing Commission, an obscure state agency, to take it up at their State House public hearing (even though this has almost nothing to do with sentencing issues). The Sentencing Commission could then formally request that the Legislature repeal these laws. It would be the push the bill needed.
We jumped right on to that. We got people from across the state to flood the Sentencing Commission with angry complaints that they need to stick to their statutory duties and stay out of the culture war. When we called them recently, they appear to have backed off. They told us they have put off any action “indefinitely.”


4. Bill to help girls get abortions from Planned Parenthood without their parents finding out. (S2138)

This bill, cleverly labeled as a “an act to protect access to confidential healthcare,” escaped notice from everyone but MassResistance at the beginning of the session. Luckily, we don’t just read the titles; we  read the actual text!
Normally, health insurance companies send a statement of all medical procedures and charges for the whole family to the primary person on the policy. This bill – filed by Planned Parenthood – would require the companies to instead send an individual statement to a family member, if requested, and not notify the primary policyholder. It specifically describes “reproductive and sexual health” as one of the types of services it would affect. In other words, if a teenager goes to Planned Parenthood for an abortion, her parents wouldn’t be notified by the insurance company.
What MassResistance did:
This bill meandered through several Legislative committees, and passed the Senate on March 10, 2016 with the help of left-wing senators.  Then it went to the House, but languished in the “scheduling” committee.
But suddenly, on Friday, Dec. 23, State House News mentioned that the House was preparing to pass it in an “informal session” – during last week of the year when no one was paying attention. We quickly got in touch with the GOP leadership and other key Reps, explained what this bill really does and why it’s so outrageous, and got it pulled at the last minute.

Passing so-called “transgender rights” in public accommodations was the Massachusetts LGBT lobby’s major goal for this session. It had the support of the Democrat leadership of both houses and, in the end, of the Republican Governor enthusiastically signed it.
We tried as hard as we could to stop it. We had activists going up and down the halls of the State House with aggressive talking points and literature that did not pull punches. We seemed to be making good progress.
But our efforts were overshadowed by the compromises, ineptness, and bad strategies of the well-funded mainstream pro-family movement who stepped in, and the pro-family legislators who followed their lead.
It pains us to say this because they are good, well-meaning people. But in the floor debates and in interviews in the mainstream press, the “pro-family” position was that accepting “transgenderism” is not a problem. That is, public transgender behavior is not a mental health issue, is not a perversion, is not anti-Christian, and is not anti-scientific. Our problem, they said, is that it allows a “likely predator in the bathroom” and is a “privacy” issue. At some level this may be true, but it’s ultimately a losing argument. The LGBT movement got a free ride on the real issues. And they pushed it hard in the State House.
We are planning a larger report on the transgender “bathroom bill” fight in the Massachusetts Legislature, which we believe will be very informative to people everywhere who are faced with this battle. We think that this is a very winnable issue. But not if we are afraid to engage it.

The battles go on in legislatures across the country

Our opponents may be well funded and well connected. But we have truth -- and passion.
Our MassResistance affiliate in Nebraska, Nebraskans for Founders’ Values, also had great success this past year stopping bills in the Nebraska Legislature. And as we’ve reported, the only reason that California MassResistance wasn’t able to stop the bill there targeting Christian colleges was that several of the colleges themselves caved in to a “compromise” that was no compromise at all. In California, the other side will be back next year, and so will we!
MassResistance is dedicated to helping pro-family people everywhere use the right skills and strategies to successfully confront the well-funded radical groups that are out to change society through state legislation.
We’ll see you all in 2017!