California is facing a budget shortfall (so much for trusting "fiscally conservative" Jerry Brown to carry the Golden State from the red to the black.

The reckless liberal Democrats have no interest in the future. They don't care about solvency or a secure legacy for all Californians.

They care about their pet causes, their special interest donors, and their future careers.

Now, there's a YUGE hole in the state budget.

That $1.4 billion "math error", which they didn't identify the reason, on the proposed California budget (reported by Thomas Krouse on FB) is the same amount as the MCO tax money which I've been saying theDemocrats were padding in the federal healthcare dollars to help pay for the illegal alien healthcare. Most of the reports I've seen have put the amount at from $1.1 billion to $1.7 billion but here's one that has this exact figure. 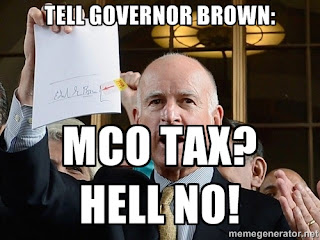 "The three-year tax on managed care organizations is expected to bring in nearly $1.4 billion a year to fund Medi-Cal, the state-federal government health program for people with low
incomes."

That could mean the incoming Trump team has identified this scam and has called California on it.

How about no taxes? How about enforcing our immigration laws?

Illegal aliens need to go. They should not be getting any benefits from this state, except an easy ride to the border, where they get in line to enter legally or not come back at all.