The city of Camarillo was supposed to be the second victory in Ventura County against SB 54. In some senses, there were wins, even though the city council decided to do nothing for now.

It’s strange and sad that the city council chose to do nothing about SB 54 as a law, when the city council had issued a letter opposing SB 54 while still a bill going through the state legislature.
What happened? The patriots did outnumber the open border bigots, brown supremacists, and Democratic handlers in the audience. The California patriots showed up organized and ready to make their case and pressure the city council to oppose SB 54 a second time: 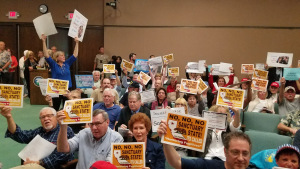 Even Don Rosenberg of Westlake Village, and a leading member of Advocates for Victims of Illegal Crime, arrived to speak at the meeting. His stake in the fight is particularly important since his son was killed by an illegal alien in sanctuary city San Francisco. 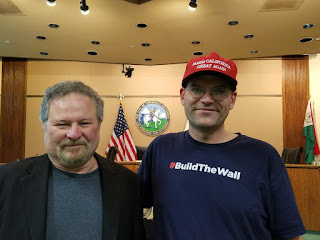 Our Camarillo team displayed courage and boldness like never before, and yet our organization and skills did not convince the Camarillo City Council to take the next steps against SB 54.
Why? I submit two reasons:
Sheriff Geoff Dean is not running for re-election, probably in part because of his tacit support for SB 54 after vocally opposing the measure when it was going through the state legislature. However, the city attorney Brian Pierik’s extended presentation probably harmed our cause more than the bitter, racist remarks of the SB 54 proponents.

He offered extensive legal research for the Department of Justice lawsuit against the state of California, touching on the arguments from both sides. He also listed eight options for the city council to pursue.

Then he tipped his hand publicly when he declared that he had no interest in writing an amicus brief or signing off on an official letter opposing SB 54. His remarks were unprofessional and inappropriate, since a city attorney serves the city, not at his own pleasure, and is responsible to advise the council not provide his own preferences.

For my public comment in favor of a resolution against SB 54 along with an amicus brief, I had prepared some scripted remarks. After Camarillo city attorney Brian Pierik's very biased, incomplete presentation, I called him out on everything that he had overlooked:

1.      The California Sheriff's Association still opposes SB 54, even after Governor Brown's so-called amendments to the improve the bill.

2.      Police chiefs like LAPD Chief Charlie Beck supported SB 54, but he has retired because of the backlash. Furthermore, police chiefs are political appointees, and therefore they follow the lead of their executives rather than following a principled stance.

3.      Individual police officers do not support SB 54, but they fear speaking out because of retaliation.
4.      The city attorney stated that five counties and twenty cities had taken different actions against SB 54. Not five, but eleven counties have opted out of SB 54, and they are:
5.      He said 20 cities, but it's more than that. I had stated 45 cities, and the correct tally is 43. Before the meeting started, someone had told me that a city named "Cardiff" had opted out -- but there is no such city. One could expand the standards for this list with San Marcos, in which the mayor filed his own amicus brief; and San Dimas, in which councilman Ryan Vienna filed his own amicus brief with the Department of Justice. The current number of cities (not counting individual elected officials in their own right) which have taken action are 43:


It's surprising that the city attorney couldn't do a basic Google search to find this information.
The city attorney neglected to mention what the city of Orange had issued: a stay of compliance. The city attorney also forgot to mention that SB 54 violates United States Constitution Article IV, Section 4, in which the federal government is charged with protect all states from foreign invastion as well as domestic insurrection.

Pierik also forgot (or willfully neglected to mention) that San Diego County voted for file an amicus brief for the appellate courts since the DOJ case against California will likely advance to the 9th Circuit.

Many people in the audience supported my comments, and I hope that people will follow up on that. 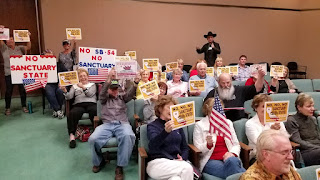 The Camarillo city council chose to do nothing more than receive and file the reports from the city attorney. What a sad downturn considering that they city council had issued a letter opposing SB 54 last year. Not only that, but the city of Glendora in Los Angeles County had also issued a letter against SB 54 during its legislative process, but just three weeks ago they passed a second resolution and filed an amicus brief against the state of California for the law, too.

Camarillo city council failed to uphold their oath of office, and part of the blame lies with the forgetful—or I believe willfully negligent—city attorney Brian Pierik.