This is California: Assemblyman Files Bill to Replace Presidents' Day with Socialist Holiday

As if it couldn't get any worse.

The California state legislature puts illegal aliens ahead of California--American--citizens. They want to ban the Bible, they treat the mental disorders of homosexuality and transgenderism and protected classes rather than troubling perversions.

One legislature attempted to pass a bill last year which would allow Communists to openly serve in the state government. That bill actually passed in the state assembly! Fortunately, the insipid, unthinking author pulled the legislation before it went any further.

Now, NOW, we have Assemblyman Miguel Santiago (D-Huntington Park), who wants to replace the celebrations of Presidents Washington and Lincoln with International Socialist Workers Day.

This is beyond shameful. This is BEYOND OUTRAGEOUS!

The report from the Daily Caller nailed it perfectly, but this report would have gone no further without Biz Pac Review sharing with the growing readership:

The California Assembly discussed Thursday a bill that would replace Abraham Lincoln or George Washington’s birthday with International Socialist Workers’ Day as a paid holiday.

Santiago and the rest of the Sacramento Democrats are going to every length possible to shore up their regressive, leftist, communist base. These radical, violent socialists have been raising hell in Downtown Los Angeles for decades, specifically in the last ten years with the push for open borders, no nations, and a global communist order.

This perverse insanity must be confronted.

“I’m aghast that a bill like this would be able to get through committee,” California Republican Assemblyman Matthew Harper said to the Assembly. “Are we in competition to be the laughing stock of the United States?”

Matthew Harper is a hero. He is one of the few most outspoken members of the California GOP caucus, and he didn't hold back his outrage. So glad that there are few people left in Sacramento not afraid to fight for truth, justice, and the American Way.

“Are we going that far to the left?” Harper asked. “This is ridiculous; this is insane; this is un-American. And for folks who think that the U.S. won the Cold War with the Soviet Union, this makes it sound like we’re going in the other direction — that indeed California is kowtowing to the Soviet domination of the Cold War.”

Finally, Democrats are admitting their hatred of the United States and their love affair with Communism, but they probably have a stronger affinity for Maoist Communism, in which the redistribution of wealth and income comes not through steady communistic imperialism, but through the barrel of a gun. Remember the Cultural Revolution and the Great Leap Forward of Mao Ze-Dong, everyone ... 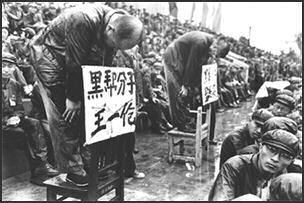 “And indeed, in that kitchen debate Khruschev had with Nixon, oh my God, was Khruschev right, Mr. Author?”

Those who fail to learn history are doomed to repeat it, and the Democratic Party in Sacramento is determined for us to relive the history of Communist oppression in our country.

This is sad, savage, and must be confronted.

This kind of legislation would not only turn California into the laughing-stock of the nation, but would lead to the endangerment and demise of American citizens. Did we really win the Cold War? It seems that the regressive leftist California government would like us to feel that way.

The Assembly read the bill three times and refused to pass it by a 27-22 vote on Thursday. But Santiago submitted a motion to reconsider it on the same day. Bill AB-3042 previously passed both the Assembly’s appropriations and education committees.

The fact that 22 Democrats voted for this monstrosity is astonishing. The fact that 29 assemblyman did not vote on this bill is even worse!

Here's the final tally from the first floor vote in the state Assembly:

That this legislation did get that far is beyond outrageous. Santiago should be recalled immediately. 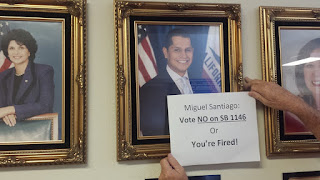 I wrote the following letter to Assemblyman Miguel Santiago's office:

I am outraged that you would pass a pill to get rid of Presidents' Day and replace it with International Socialist Workers Day.

Shame on you. Many of your constituents fled the destructive ravages of Communism--and you want to celebrate it?!

Shame on you! You took an oath of office to uphold and defend the United States Constitution. Our founding charter is antithetical to the Communist ideology, which killed more people the all American and international wars from The Civil War to Vietnam.

I urge everyone of you to contact his office, too.

Here's the information. Why not pay his office a visit, too?!


Posted by Arthur Christopher Schaper at 11:21 AM