Not backing down on the truth -- in a sea of insanity

See our VIDEO of CA-MassResistance in action! 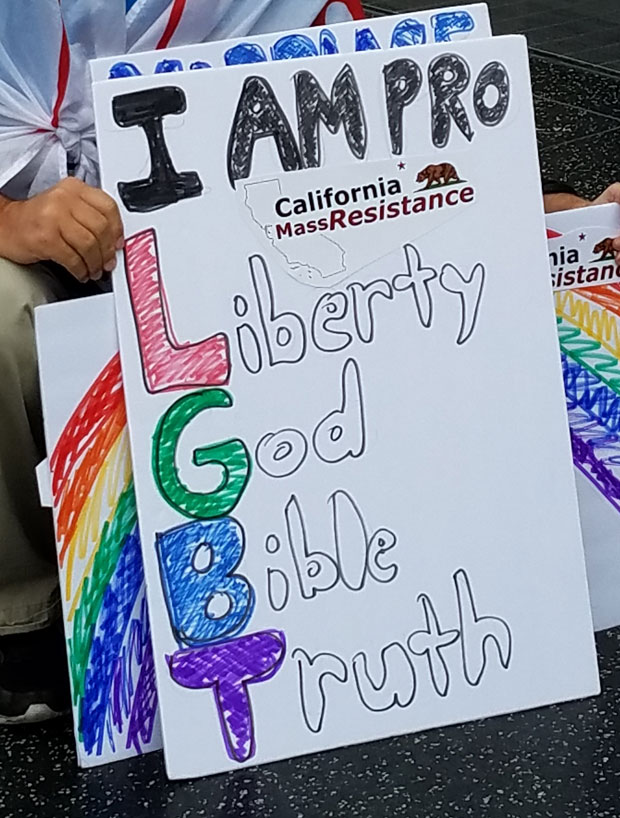 On Sunday, June 11, the Los Angeles Gay Pride Parade marched through Hollywood and West Hollywood. The parade’s theme –  “#ResistMarch” – was an expression of hatred toward Republicans and the President, plus a call to push the LGBT agenda even harder. As always, there was a lot of LGBT sex imagery. This year, the organizers didn’t invite floats or corporations – just activists. At the end of the parade, a rally showcased several chilling anti-GOP speeches by prominent politicians. 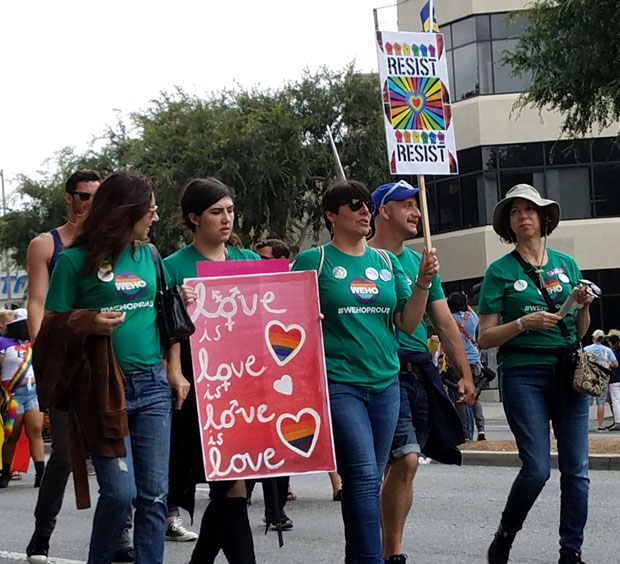 A lot of the groups marching in the parade had no coherent message. So what's new?
A fearless MassResistance California contingent, led by leader Arthur Schaper, was there also – right in the thick of it! They brought signs and a banner. They faced down everyone who confronted them. They told the truth over and over about homosexuality, the never-discussed medical issues, the contentious political issues, and more. And they poked a finger in the eye of the anti-Trump venom (see examples below).

Shocking the Left with “fearless conservatism”

Frankly, the LGBT activists and others mostly seemed taken aback. They were not prepared for this brand of fearless conservatism. And certainly not at one of their “safe spaces”. Most of them seem never to have been confronted with real arguments, and they didn’t know what to say. 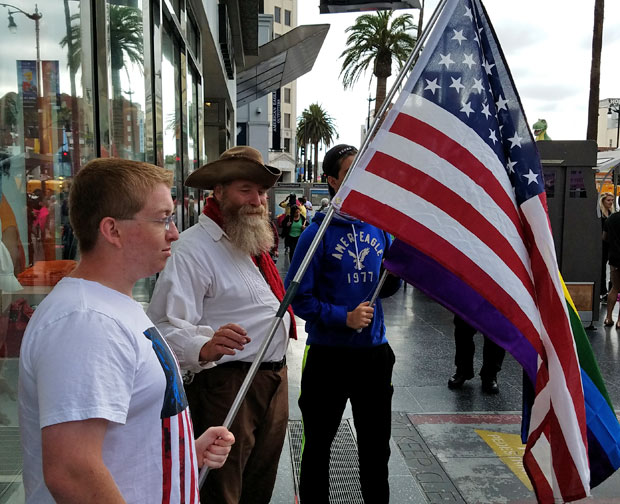 Three of the California MassResistance activists get ready to move into the parade area. 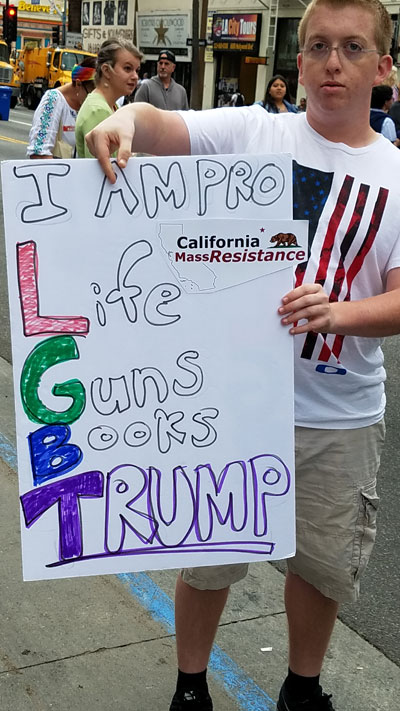 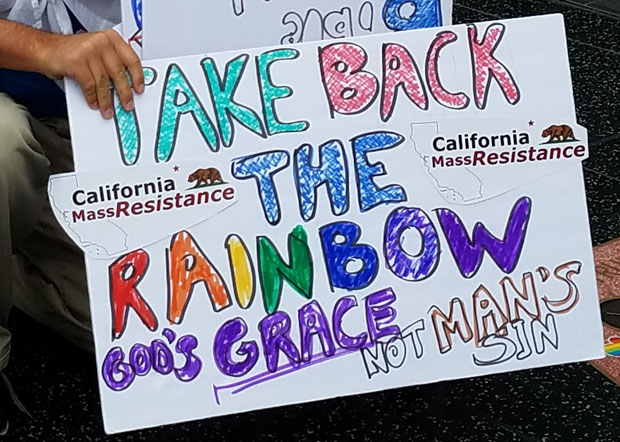 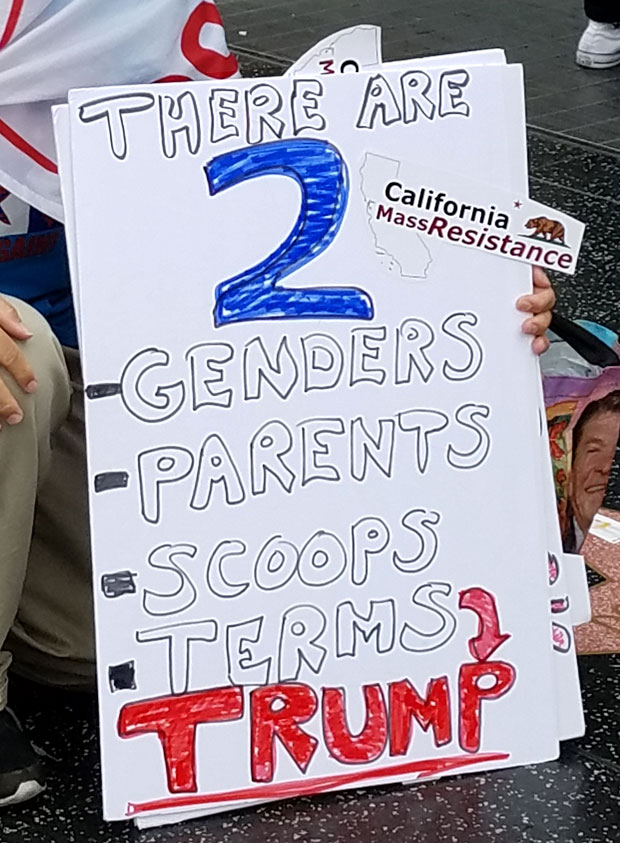 For example, Arthur talked to one activist who told him she was a lesbian: 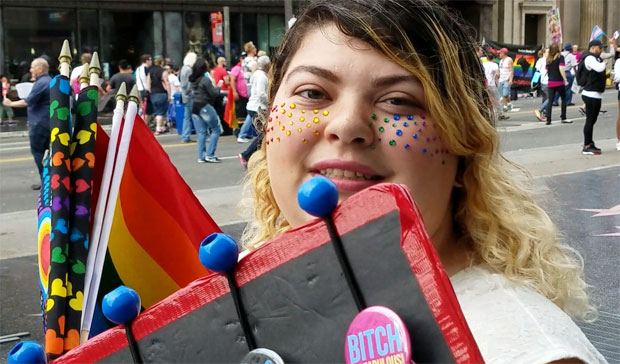 Arthur: You realize that people that engage in same-sex behavior, they’re cutting their lifespan short twenty percent. You know that, right?
Lesbian: Are you threatening me?
Arthur: I’m not threatening you. It’s the truth. It’s venereal disease. It’s the emotional trauma that comes with it. I have a lot of friends who identified as gay, and they’re dead.
Lesbian: So maybe I’m going to die young?
Arthur: I’m saying that you’re risking your life.
Lesbian: I don’t care.
Later that day, the Breitbart news site featured a photo of Arthur Schaper of California MassResistance in their article about the parade. (Note: Their article mistakenly says that Arthur was the "lone" person in opposition; actually there were several -- one of the others was in their photo..)

A sea of left-wing hate

Nevertheless, it was impossible not to be affected by the intense hatred and arrogant self-righteousness against Christians, President Trump, Republicans, and anyone who was perceived to disagree with their agenda. Most conservatives have very little experience with this on such an intense level. It permeated everything. It was all emotion, beyond any honest dealing with facts or rational logic. It’s how one might imagine the feeling at a Nazi march or Maoist rally. 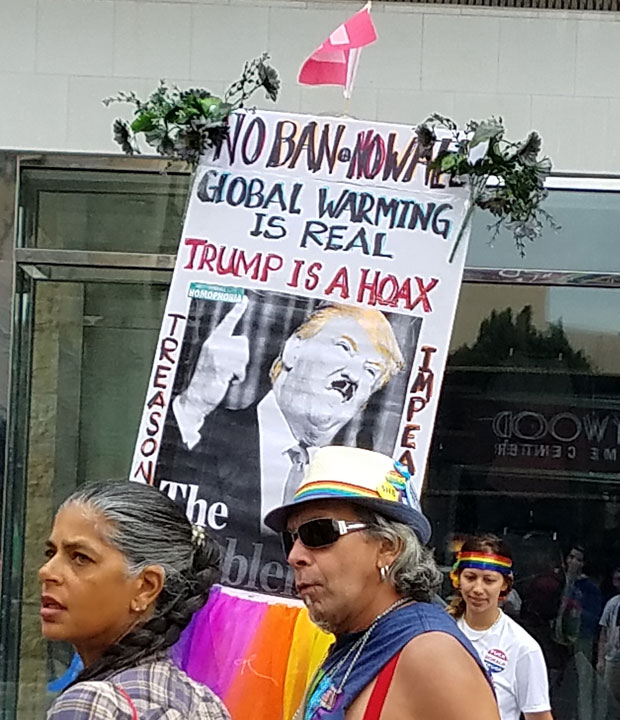 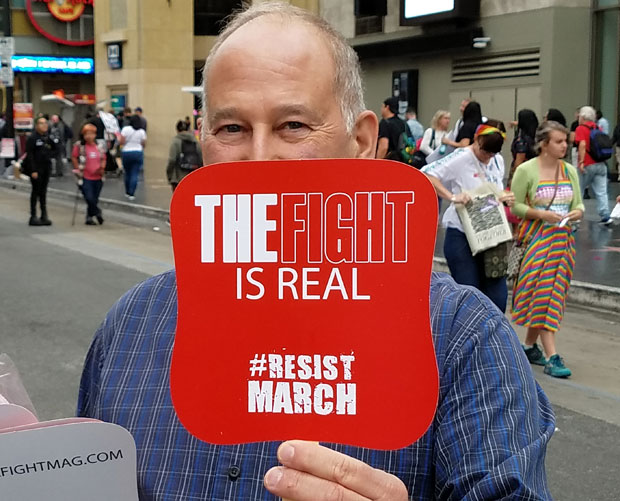 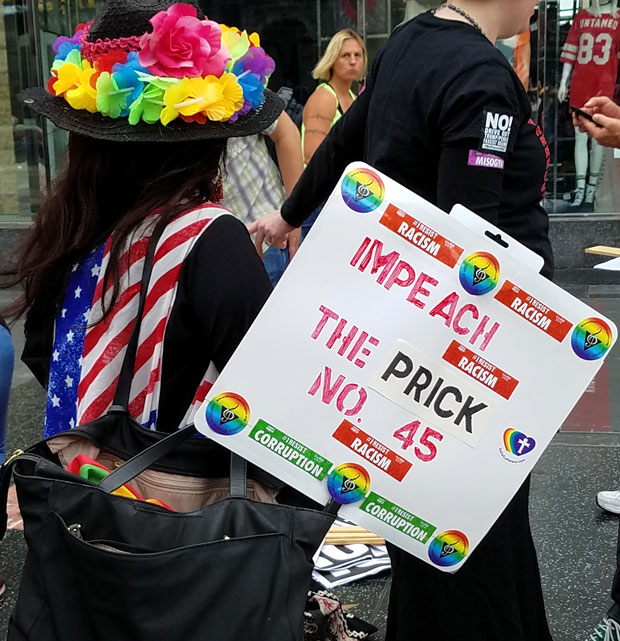 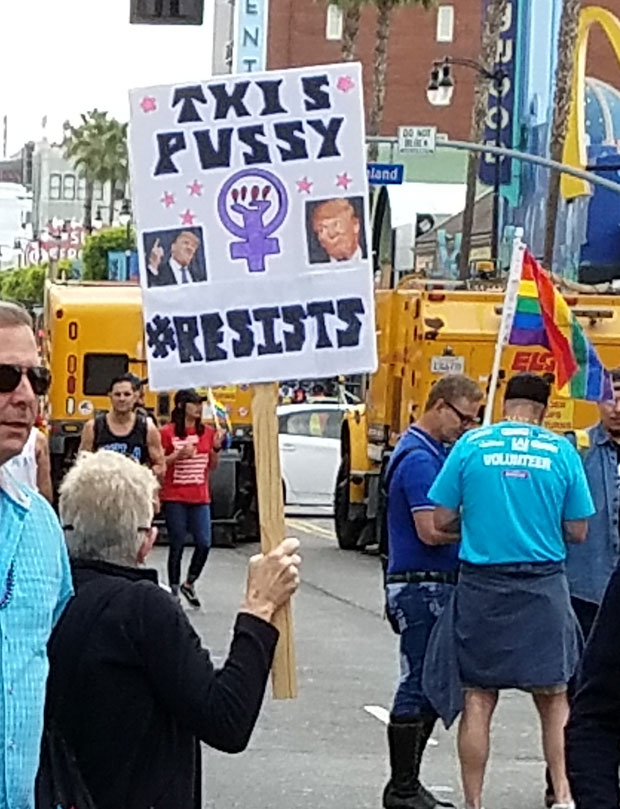 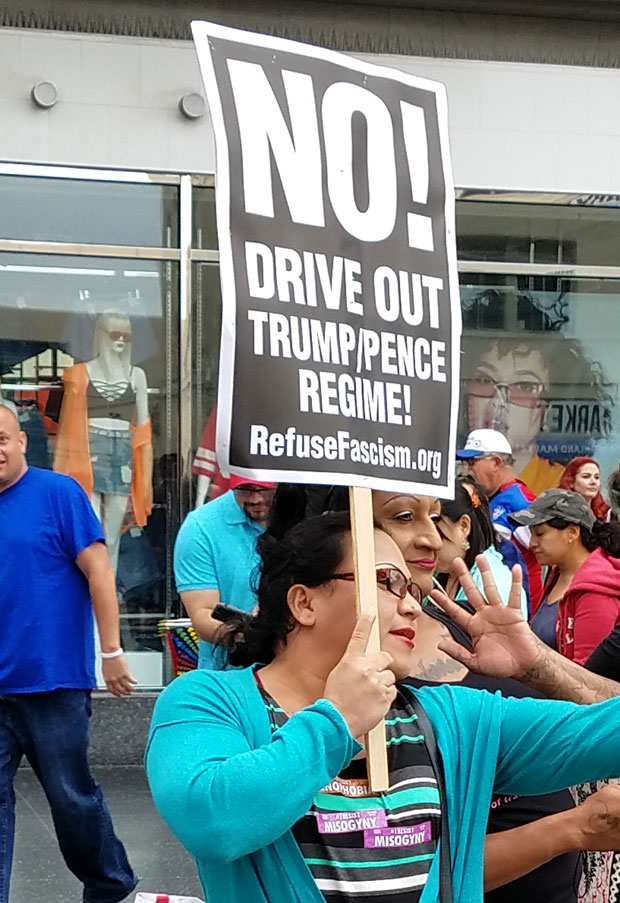 At the end of the parade, immediately afterwards, there was a rally with speeches by public officials. Included were: U.S. Rep. Nancy Pelosi, the Mayor of Los Angeles, the local Congressman, the Los Angeles City Attorney, various City Councilmen, and others. It was basically a flood of hate and venom against the GOP, Trump, and anyone with traditional values. It was eerie to hear prominent elected officials saying these things.

The crowd in the street seemed mesmerized by the rants of the speakers.
For example, The Mayor of Los Angeles said:
We’re the first big city in America to have a trans [transgender] advisory council that will fight for justice for all of us.
Our health care will not be denied. We will make sure that the ACA stands, and that this president who is assigning us, that if we have cancer, to dying in the streets. Not in this America.
Why do we resist? Because we will not stand idly by while they try to push us back into the closet. Because we will not wait for someone else to save us from injustice. Because we will not accept transphobia, homophobia, xenophobia, or racism. Because when they come for one of us they come for all of us.

We need be willing to confront this everywhere

As Arthur said to the LGBT activists standing nearby:
Homosexuality is destructive. Transgenderism is a disorder. It is not a civil right. Kids should not be learning about this stuff. And adults should be learning the truth. There is no reason to be in bondage to a behavior that will cut your lifespan by twenty percent, which will lead to a further spread of disease. It’s hurting our culture. It’s hurting our society. We’re going to stand up to it.
The Los Angeles Gay Pride Parade is admittedly a pretty intimidating place for conservatives. But this is what it eventually becomes when our side almost never actually challenges the Left toe to toe. Sure the national pro-family movement publishes a lot of scholarly articles and sharp commentary on the Internet – but so what? As we’ve said many times before, we need to be confronting the other side like this all the time, every day. The Left’s distorted psychological state can only stay intact if we are too fearful or intimidated to challenge it openly and break it down. But left alone, their hate and oppression will know no bounds.
MassResistance California provides an example of direct action we all should emulate. And we’ve got more to report from their recent activities on the front lines!