No Sanctuary for Criminals Act HR 3003 PASSES! Who Voted How?!

Kate's law has passed the House.

As predicted, Republicans voted for it, and Democrats opposed it.

But ... there were Democrats who voted for the bill!

And there were Republicans who voted against it!

Who were the Republicans who voted NO?! 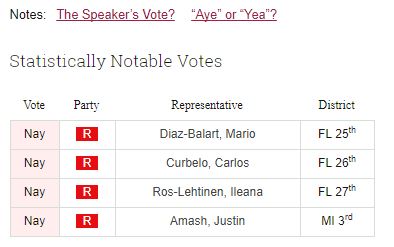 Three of the Republicans are from Florida. They have been unreliable on immigration, especially Mario Diaz-Balart, who thought he could get other Tea Party people in line with his amnesty views.

Justin Amash has turned into a real disappointment.

Why did he vote against this common-sense federal enforcement bill?

I voted no today on two bills that together violate the 1st, 4th, 5th, 10th, and 11th Amendments. I will always defend our Constitution.
— Justin Amash (@justinamash) June 29, 2017


Would someone like to tell me how overriding abusive, arrogant sanctuary state and city laws violate the constitution?

They don't. Our immigration laws fall within the bounds of the federal government: Article 1, Section 8. The Supremacy clause of the United States Constitution clearly outlines that any laws which try to oppose or overturn federal laws are null and void.

Point taken: the United States government has every right to enforce immigration laws and permit ICE detainers to stand. 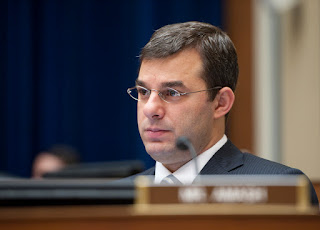 Amash is a wash. He needs to go.

Where there any other way Republicans who voted against this bill?

Peter King voted no? I find this hard to understand. He has been one of the most vocal opponents of national security threats.

New York is a more liberal enclave, but still the New York City police and lawmakers in general are cracking down on illegal immigration. The Sheriff for liberal Suffolk County rolled back the sanctuary city policy there.

David Reichert is another amnesty squish, and he wants to make nice with the DREAMers.

Amash is another disappoint, too.