The City of El Monte and its partners hosted an informational forum on immigration and resource fair for community members at the Nativity Catholic Church April 27.

After a similar event called “Know Your Rights” seminar at the Grace T. Black auditorium in El Monte that was hosted by Congresswoman Grace Napolitano was interrupted by a Donald Trump supporter April 14, the city decided to hold another forum.

Here's the whole video of what happened:

The forum, which was advertised with posters around the city, was calmer this time around with police officers surrounding the church in case of another situation.

Calmer because the mayor went out of his way to hide the event.

I had to take a tip from a resident in El Monte to call out this Friday night town hall teaching illegal aliens how to avoid capture and deportation for violating our nation's immigration laws.

While many were reluctant to come at the start because of the Trump Supporter incident, it took a while for the three hour forum to begin with it being pushed back to 6:30 p.m instead of 6 p.m.

How about that? They were afraid, as they should have been.

Directed towards residents who are impacted by the changes in immigration laws, the forum featured community leaders, elected officials, and immigrant advocates that provided information on the status of undocumented immigrants.

We do not need a change in our immigration laws.

What is needed is clear enforcement of our immigration laws.

After the dignitaries and guest speakers were introduced, the general discussion was held inside the church until 7 p.m as the rest of the other eight informational workshops began.

The workshops took place in buildings surrounding the church and included topics such as Detention/Deportation Defense, Temporary Protected Status, U.S Naturalization and Citizenship, and Deferred Actions for Childhood Arrivals.

That church should have its non-profit status revoked!

One El Monte woman named Ariana Briones who attended the event, thought it was “very informative” and addressed the concerns her family had as well, feeling comfortable and relaxed. Briones mentioned she would come back if there were anymore events and recommended those that need help to come and learn more.

Now you and I see why the marginalized media is in total free fall. The romanticize the plight of illegal aliens, but despise or ignore the needs and concerns of American citizens, the men and women who are supposed to be the target audience. 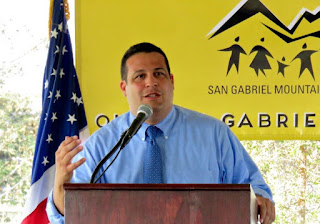 El Monte Mayor, Andre Quintero, thought the general reception to the event was positive from the residents and was satisfied with the turnout saying that he “hopes the word gets out about the success of the event so that more people will have confidence to come and get the information they need.”

How about information for the rest of us to know, so that we can call ICE and have illegal aliens detained and deported?

As the general discussion was held in Spanish, Mayor Quintero said that that was not done purposely, saying he thought that they were going to do it in English and then have translation, but saw who was there and who they were serving that it just turned out that way.

As there is a disconnect with the current administration of the U.S and the rhetoric that they have chosen to communicate with  “has made things very difficult and made people very anxious,” said Mayor Quintero.

President Trump does not make anyone feel anything. Individuals are responsible for their responses to policies and practices.

As Mayor Quintero takes pride in the success of the event, he said there is not a plan yet to make another one saying that hopefully “we’ll be able to have it soon.”

No word about another event, and that's the way it should be.

Congresswoman Grace-less Napolitano already had a stroke, and now she suffers from cancer. She had intended to announce her retirement at the April 14 illegal alien town hall, but We the People Rising showed up to display this corrupt and protest at length. Teaching illegal aliens how to break the law - that is the essence of treason.

The huge fails of the declining liberal press are unmistakable. They are choosing to go out in a blaze of shoddy glory.