For his first trick as California Assembly Speaker, Anthony Rendon managed to accelerate unemployment for the vast majority of young Californians out of work.

He accelerated the automation process.

Minorities will struggle more to rise up the economic ladder in a state hostile to working and middle class interests.

How did Speaker Rendon accomplish this terrible fraud?

He forced a bill through the state legislature, and the union's beck and call, to force up the minimum wage incrementally until it hits $15 an hour in 2022.

This legislation will merely consolidate power for the remaining employed union laborers, while small businesses, young entrepreneurs, and even thriving suburbs struggle to take on the onerous, rising costs of doing business in the state of California. 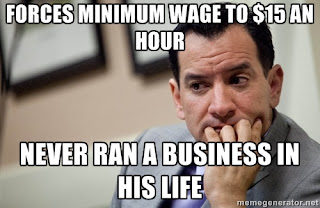 Heckuva a job there, Tony!

Has he ever run a business? Does he not care about the poor Latino communities in his own district?

Who cares what kind of higher learning he claims?

The man is an utter failure when it comes to economics. Where does he think that businesses, that local governments get their money to pay people? It does not grow on trees despite the hard-pressed beliefs of the liberal intelligentsia in Sacramento.

With such reckless disregard for the needs of California residents. I think it's safe to say that Speaker Rendon does not even deserve minimum wage for whatever he is doing in Sacramento!
Posted by Arthur Christopher Schaper at 9:09 PM