Since January 11th, 2016, We the People Rising have pressured the Cudahy city council to renounce its abortive, illegal, and immoral sanctuary city policy.

Yet even before we arrived, residents in the city had informed me of the routinely immature and corrupt choices of the Cudahy City Council.

After nearly three months of attending the meetings, Cudahy residents have become bolder.

Seniors and parents alike have confronted Los Corruptitos de Cudahy on their spending sprees, their policy malfeasance, and their apparent incompetence.

It is really a sad display.

The city councilmembers deprived young girls of their opportunity to perform for their parents and distant relatives, many of whom had driven a long way to see them dance.

The senior citizens had also received wonderful service and treatment from Club de Oro, but the city council was cutting the program. The members also decided to raise fees on city civic events and programs like boxing.

What is it about these cities? They stick high fees and costs onto the working class residents, many of whom barely make ends meet, working two or three jobs.

Incredible! How much longer do these council members really think that they can get away with this inane disregard for their constituents? 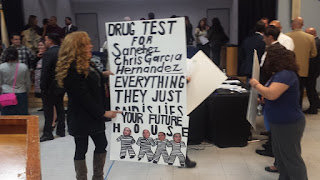 Even though April 11th, 2016 was designed as the Reorganization meeting for the city of Cudahy, residents from the city--and We the People Rising--had a distinctly different agenda.

For the record, our members clearly criticized the council within the confines of the sole agenda item: who would become the next  mayor and vice-mayor.

Popular sentiment wanted Jack Guerrero to return as mayor, since he had taken decisive action at the outset to ensure good government, including an end to waste and mismanagement. For the past three city council meetings, Guerrero has addressed the council as a private citizen.

He has protested the council's ill treatment of the residents, including the outrageous fees, the financial mismanagement, and now the consistent suppression of speech during public comment.

Guerrero's stock has grown with Cudahy residents. They recognize him as the only man on the city council. The senior citizens expressed their love and support for both Guerrero and the Club de Oro instructors, whom the council was releasing from contract. 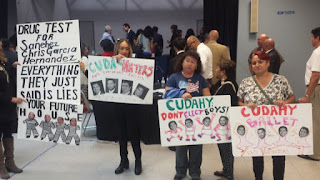 Pamela Mungia wants the world to know something about three of the Corruptitos: 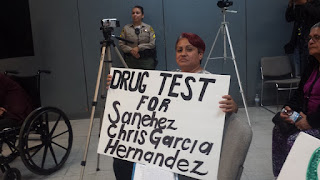 Of course, we all know the following about the four ity cohncil members, ho have resorted to the race card in a bare attempt to silence We the People Rising: 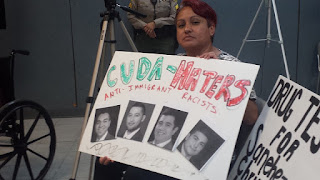 And We the People Rising reminded the Cudahy Corruptitos that we are going nowhere until the city gets right with the federal immigration laws: 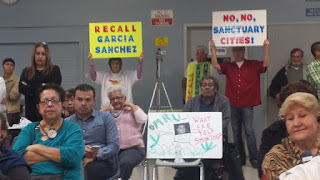 Dr. Robert Newman read from the Scriptures, reminding the city council that sanctuary city policies existed under an Old Covenant in Israel, when someone had committed a crime ... accidentally. The current concept of "sanctuary city" policy is a complete corruption, immoral and illegal. The city needs to stop protecting people who reside in the country illegally. They need to honor the rule of law and encourage legal immigration.

At the end of the meeting, I protested the reorganized city council, along with other members of We the People of Cudahy.


Posted by Arthur Christopher Schaper at 12:06 AM