Orange County Supervisor Michelle Steel took an iron rod and an ax to any notion of the state legislature raising our taxes!

Do you want the government following your car every day? Most of us don't like that Orwellian vision, but that's what a tax scheme brewing in the Legislature just might do.

Californians don't want a new tax on driving. As of December, the state pilot program to create a new mileage tax had convinced only 570 Californian drivers to sign up - a tiny portion of the 5,000-driver goal. Why Californians aren't participating is clear: We don't trust Sacramento with more of our money. 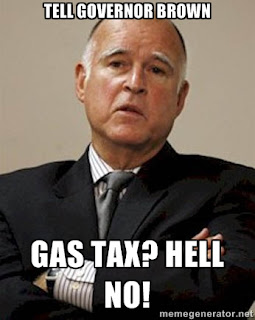 No kidding! They spend money that they do not have, and then tax us for money that we do not have! They have just raised costs on small and large businesses, while putting hundreds of thousands of young people out of work!

Proponents contend this new tax will replace the existing taxes on gasoline, but when is the last time you heard of a government eliminating a revenue source? The California sales tax was created as a temporary "emergency measure" in 1933, and it never went away. As Ronald Reagan said, "Government programs, once launched, never disappear."

Hell to the No! There is no sunset on taxes in California, especially with Democrats still dominating the state capital, legislature, and the political machinery up and down much of the state.

The outposts where Democrats have no dominion, those same regions want to break away and form their own states!

A similar pilot program underway in Oregon requires drivers to pay new mileage taxes on top of existing gas taxes. Drivers must wait to get a refund after the fact. This monthly billing process will only create greater issues with the creation of a bureaucratic collections agency. 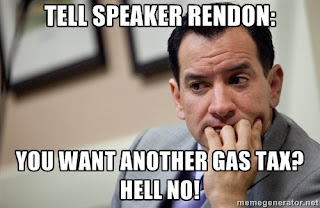 Proponents also claim gas tax revenue is drying up, but, according to the most recent annual report from the California Board of Equalization, gas-tax collections were up a half-billion dollars in fiscal year 2013-14 over the year before, and gas consumption was also up by more than 100 million gallons during the same period. Despite the growing popularity of fuel-efficient vehicles, gasoline usage is not in terminal decline.

There's an irony here as well: State government is hard at work to get Californians to drive less, but at the same time they want to tax us based on how much we drive. For example, many cap-and-trade tax grant programs require projects to show they will reduce "vehicle miles traveled." But the vehicle mileage tax only works if Californians keep their "vehicle miles traveled" up. By pushing two contradictory systems, the state is setting taxpayers up for yet another failed tax scheme.

Yes indeed! The Big Green Agenda 21 push to drive (pun intended) every California out of their cars is hitting one roadblock after another (again, pun intended). These Sacramento politicians and bureaucrats are so stupid, they would drive themselves off the edge of the world.

Today's mess of a gas-tax system is not the result of an outdated tax policy, or because of Californians using less gas. It is due, in part, to a decision by Sacramento politicians to divert gas taxes from roads and use them for other programs. Why would we trust that adding a new tax on drivers would fix the problem? Might it not be more likely this new tax, just like the old taxes, is another attempt to take more money from struggling California drivers?

The problem with transportation taxes is not with collections; it's with spending. Money meant for roads and highways is consistently being raided to balance the budget or put towards newer programs deemed more important than safe and reliable roads. Adding a new tax system will not fix that problem. 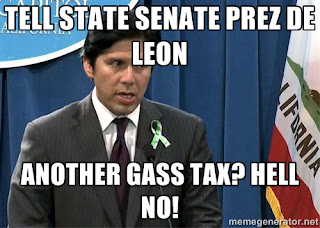 The first step to creating a more transparent tax system is ensuring that the tax dollars are going where they should go. This means that politicians should turn their attention away from new tax schemes and toward ensuring that all transportation-related revenue be spent on funding roads and highways.

Californians can't trust what Sacramento will do with our tax dollars. Until we can, I urge Sacramento to park the new tax on driving and to lose the keys.

I want all Californians to join with Michelle Steel and the rest of the California residents who are tired of getting nickeled and dimed by Sacramento.

You need to check out this video.

This whole plan to tax people for driving - is ultimately to get them out of their cars!!!!

Another Gas Tax? Hell No!