Kevin De Leon Needs A Lesson (Or Two) on Education

This past weekend on "News Conference with Conan Nolan", state senate President Pro Tem Kevin De Leon was whining about the teacher shortage facing the state of California.

First of all, a teacher shortage is afflicting states all over the country.

However, the education crisis is particularly acute in California.

What did De Leon have to say?

This ruling was a big win for the teachers unions.

Yet like the true politician that he is, De Leon refused to answer the direct uesiton, and euivocated about the stances.

"Whether you support the decision or are against the decision, we have a teacher shortage in the state of California."

Now why did De Leon dodge the issue?

If he stands with the teachers unions, he will have hell to pay.

Whether Democrat or Republican, Californians do not like the teachers unions.

Yet they are so powerful in the state of California. They pretty much dictate every policy laid out for the legislature to pass. If the CTA does not want this or that bill to pass, it dies.

Democratic legislators who agree with Republican ideas and bills have admitted to the assembly and state senate minority leaders that they cannot support education reforms.

Why? Big Labor will take them out!

Of course De Leon won't say anything! He doesn't want the President of CTA breathing down his neck, then flicking him out of office.

So, let's talk about that teacher shortage:

"No wants  a bad teacher in the classroom, but we cannot fire our way out of this problem."

Shame on Conan Nolan for not going in for the kill on this question.

He needed to hammer De Leon for an answer on Vergara.

Does he support good teachers for kids in the classroom, or not?

Should unconditional tenure remain in the state of California? Yes or no? 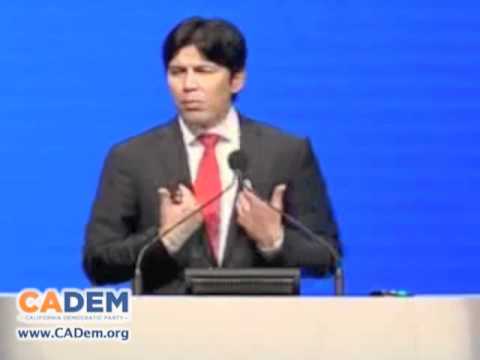 Yes, senator, there is a huge teacher shortage in California.

So glad you bothered to notice.

Want to know why?

Teachers have no control over their classrooms. They routinely endure abuse and disrespect from the students, the parents, and even the administrators.

The testing demands and the bureaucratic wrangling which teachers have to navigate is beyond ridiculous.

Students no longer have the necessary support systems to stay on track. That general remark points to the dire crisis of children no longer raised in two-parent homes. Who is holding the kids accountable at home? Where is the necessary guidance to raise and rear children to become strong and productive adults?

Teachers cannot be expected to take on these demands.

Oh, and teachers are so poorly paid! How many professionals want to work for thirty years, only to get incremental pay increases, without any recognition for hard work or long-standing merit?

He will not stand up to the teachers' unions.

He will not do what is best for California's kids.

He does not really care about California at all!