I tried to call them out in advance, suggesting that they had already decided who would be the next mayor and vice-mayor.

I predicted Cristian Hernandez as mayor, and Baru Sanchez as vice-mayor.

It was the other way around.

Here is the swearing-ceremony. Watch here.

Notice that a vast majority of the audience walked out of the meeting during the final award ceremony. The pitiful applause further indicated that any support for the out-going mayor was anything but ... outgoing.

One of the fun parts for me occurred in the middle of the meeting, though.

I noticed over my shoulder that Huntington Park rata con quatro patas Jhonny Pineda was watching the proceedings from the back wall.

Here are some photos: 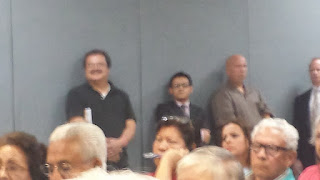 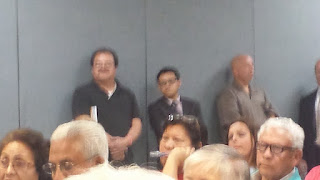 I was sitting in the front row, holding my protest posters. Pamela Mungia was sitting at the end of the row.

Then Pineda decided to sit next to me.

He did this to force me to move my posters, so that I could not keep them up.

I had refused to let him sit next to me.

The sheriff's deputy then came over, and I relented.

Instead of getting mad, I decided to have some fun.

I tried three times to get a selfie with Pineda. He finally got angry, and said: "No one wants to take a picture with you!" then he stormed off.

I got my seats back, and I brought up my posters again.

Here is a video of what happened as Pineda ran away.
Posted by Arthur Christopher Schaper at 12:48 AM