Many Reasons to Choose Ted Cruz

The outcomes from last night were less than stellar.

Well, let's state the matter blatantly: Ted Cruz had probably the worst night of the primary.

First, New York State, where he finished third, behind "doesn't have a cake's chance in a wedding" Kasich.

He also got snuffed out in five more states right afterward: Pennsylvania, Maryland, and three New England dominions, including Connecticut and Rhode Island.

Little Rhody is one of the most liberal states in the union, by the way. Bernie Sanders defeated Hillary Clinton there!

At least Cruz won three delegates in the Ocean State! Roger Williams would be proud.

So, do I want to throw in the towel?

Honestly, I did last night.

I mean, in a sense, it's not fair to try and stop Donald Trump, since Cruz is behind in so many delegates.

I am a pro-free market, free-enterprise, and free-people advocate.

Cruz has fought for all of those things. 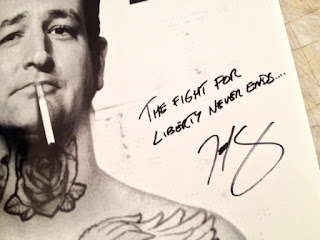 Out of seventeen candidates, he was the only other contender who stayed in, wisely investing his campaign resources for the longer fight.

Cruz was not my first choice, but he remains the best choice of the three.

Political parties do not exist merely to allow a dispersed consensus to choose a nominee.

Trump has a more significant edge over Cruz, compared to Ford against Reagan in 1976.

But I am going to rally for Ted Cruz as long as he chooses to contend for the Presidency.

I want to see the increased Republican turnout in the remaining states, especially here in California.

For the first time in decades, California's voter turnout matters in the Presidential election

Trump has not yet won the nomination. He has not amassed the necessary 1, 237 delegates.

The junior US Senator from Texas is the real statesman in this race. He represents so much of what I care about. I am fighting for the long haul.

The fight for conservatism is not over.

It just needs new fighters, men and women--like Ted Cruz and Carly Fiorina--who will not stop standing up for our God-given rights.

I choose to Go For Brokered.

Even if Trump gets the majority of delegates before the convention, at least I can say:

"I TrusTED and I TriED all that I could."