Assm. Cristina Garcia (D-Downey) Rejects My "There Ought to Be a Law" Suggestion

Assemblywoman Christian Garcia issued out a proposal to invite her constituents to suggest a new law.

Since she represents areas close to Cudahy and Huntington Park, I asked her to pass a law which would require citizenship before anyone could sit on an advisory board or a commission, or any position of public trust in the state of California.

Surprisingly enough, she got back to me. 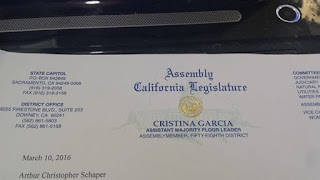 Her letter was specific to my request, even though she denied it:

"Thank you for your bill idea on requirements to volunteer. Recently the city of Huntington Park named two individuals to the parks and recreation commission and the health and education commission. As volunteers, these two individuals wil work with other appointees to the commission on how to improve the cit  of Hunnington Park's [sic] well-being. Civic engagement has been low in this area in the last few years. These individuals are setting a positive example for the community and for younger individuals that want to participate in the future, as well." 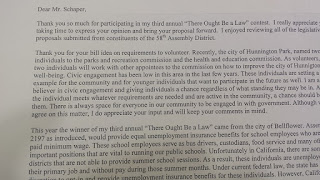 She then wrote to me that the winner of her "There Ought to be a Law" contest came from a resident in Bellflower, which would provide equal unemployment benefits for school employees who typically earn minimum wage.

Of course, this letter came to me before the $15 wage hike was forced down every Californian's throats, or into their wallets.

This "ought to be a law" AB 2197 basically enables people to continue collecting a paycheck when they do not work over the summer session. Who sponsored this bill? The SEIU, of course! 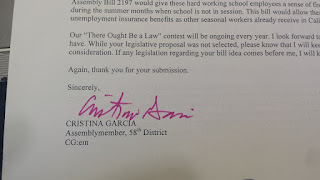 They have been claiming for more easy money for unemployed seasonal workers in public schools for years. The union questionnaire presses prospective school board candidates for their views on these and other non-essential, non-educational issues.

The letter was filled with typos and spelling errors.

Did anyone proofread this letter before mailing it to me?!

She refuses to write the words "illegal alien" or even mention the illegal status of the two illegals sitting on the commissions in Huntington Park.

This abuse must cease.

We are a nation of laws, not sentiment. If the four city councilmembers of Huntington Park who approved the offensive, nonsensical appointments of Julian Zatarain and Francisco Medina cannot understand the need to respect the rule of law, then they need to be run out of town on the first train.

As for Cristina Garcia, does she not realize that the low civic participation in these regions stems precisely from the unfathomable lawlessness taking over the region? Why should anyone get involved in local politics when the Mexican Mafia decides who wins or loses? Who lives or dies? Which businesses profit and which fail?

Shame on her for caving to Big Amnesty and not looking out for the legal residents of California!

Call her office, and tell her to Put Americans First!