On April 11, 2018, Westminster California was the site of another epic victory for We the People.

Opponents of the unjust, unconscionable, and unconstitutional SB 54 have been hitting once city council after another to put an end to the lawlessness.

I showed up at the city council chambers two and a half hours early, since one well-known Democratic activist was there: Tim Phan.

I ended up talking with him for a great deal before assembling in front of the city hall:

For the first time, I was able to approach his take on issues in a very different way. With everything that I learned from Evan Sayet, I understand how modern liberals think, or at least why they think the way they do, and why so much information gets little attention or why they choose not to acknowledge a number of concerns.

Our discussion delved deeper into concerns than he would have considered, and he was taken aback, but I was happy to have those discussions. There is a way to "red pill" young people, and we need to understand the basis for the views in order to change them more effectively.

From there, the two sides on this contentious issue assembled in front of the Westminster City Council Chambers.We hid within the confides of "Do Not Cross" yellow tape, while a crowd of about 40 pro-illegal protesters gathered outside to make their chants and get everyone revved up.

Jeff LeTourneau, the Democratic Party Vice-Chair for North Orange County, arrived on the scene, and immediately he flipped me off!

I confronted him, and he started shaking and getting really nervous and angry. He would be a lot of fun to troll throughout the rest of the evening.

And it was a long evening!

Let me tell you what was really surprising. 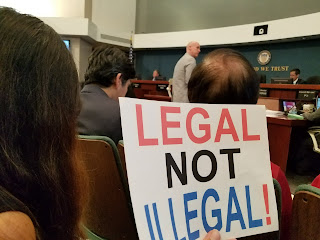 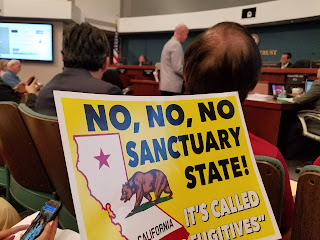 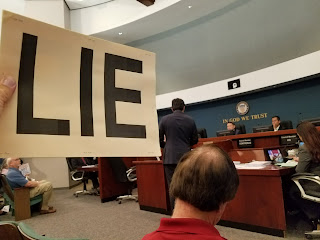 State Senate Kevin De Leon arrived! He was going to grandstand once against to defend his precious SB 54, sanctuary state legislation. Incredibly, he had to soft-pedal while selling his legislation, making the point that he wasn't prevent ICE from doing their job in the state of California. Once again, he trotted out the flimsy argument that he was merely protecting city and county taxpayers from their money getting spent on enforcing federal immigration law.

He left the chambers under another heavy cloud of boos and raucous dissent. Special thanks to my friend Robert Lauten. He was sitting right behind De Leon on the right side of the chambers. He then invited me to switch places with him!

Thanks, Robert! I was able to troll the wicked, corrupt, lawless state senator the whole time before the meeting was called to order. Not only that, but two seats down from me sat Bao Nguyen, the openly gay, ultra-leftwing former Garden Grove mayor who later ran for Loretta Sanchez' house seat in 2016. 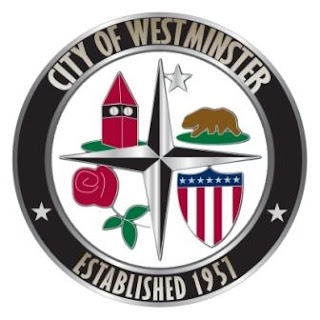 He has turned into a progressive has-been politician popping up in different activism events to regain relevance. He not only failed again, but demonstrated how immature and out-of-touch he and his fellow liberal activists have become.

The public comment period in Westminster lasted for four hours. Everyone commented for two minutes. Many residents in the city and in the Orange County area spoke out against SB 54 and urged the city to join the DOJ lawsuit against the state of California launched by the Department of Justice.

Most of the people in favor of SB 54 and who opposed an action to stop it were college students are unthinking liberals. I have learned that indeed many of these individuals are committed to a good or at least any kind of peaceful outcome.

The college students behind me and in front of me were rude, making comments against the men and women who opposed SB 54. They were more interested in mocking people who disagreed with them. Many of the pro-illegal alien activists played off the "Vietnam refugee" card, in an brazen attempt to shame people who want to limit legal immigration as well as stop illegal immigration.

I was astounded, yet so many Vietmanese who had immigrated to the United States, and many of their children, determined to support and promote SB 54. It was shocking and sad, misguided folly at its worst.

I liked listening to some of the Vietnamese immigration, now naturalized citizens who opposed SB 54. Many residents in Westminster also established their commitment to the rule of law, not to feelings or social justice warrior antics.

Just to summarize quickly the rest of the very long evening, I want to report on the public comment and remarks from the city council. Only four of the five members were present. Councilwoman Ho had a prior engagement.

Councilwoman Rice had introduced the motion to uphold the US Constitution, then add an amicus brief to support the lawsuit against the state of California. Tyler Diep, who is running for state assembly to replace Travis Allen, seconded Rice's motion.

Then came the extensive speeches from different members of the panel. 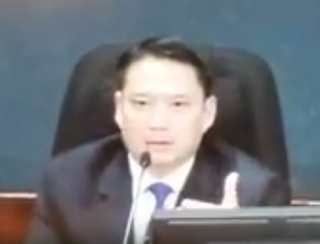 Mayor Tri Ta's comments were beautiful, stirring, and inspiring. He shared his whole story as an immigrant, a refugee from Vietnam. The country had fallen in 1975, but he could not even begin the process until 1982, seven years after his uncle had arrived in the United States.

He didn't get an interview with immigration authorities until 1990, and even then he did not arrive in the country until 1992.

He had to wait, separated from members of his family for ten years before entering the United States. I have no idea how long it took for him to become a citizen. It's a long, arduous process to become a naturalized citizen of this country.

Yet Mayor Ta repeated his commitment and the ultimately necessity of upholding the legal process, the rule of law, and the United States Constitution. "I am a compassionate person," he told the audience. "But I took an oath."

His speech was so moving, I cried. He made me proud of this country, and he made me feel proud to be an American again. We need our elected officials to engage in these discussions, to reassert their loyalty to this country, and to explain why this commitment is so important--and why it's worth it. 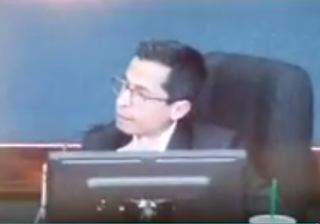 The predicted dissenter, Councilman Contreras, resorted to one dilatory tactic another, arguing that this motion did not have a time limit or that it would cost the city money. The Chief of Police and the city attorney debunked the potential setbacks to Councilwoman Rice's motion.

Eventually, she offered an amended motion which would direct the city to join with an amicus brief filed by another city to oppose SB 54.

The final motion passed 3-1. The whole room of patriots cheered mightily. It was incredible!

Here's the whole video of my YouTube live recording of our team's activism in Westminster:

Posted by Arthur Christopher Schaper at 3:34 AM