Trump vs. Amazon: What is Going On?

I didn't have a chance to comment on this article from March.

But I did want to share some thoughts about Donald Trump's targeted attacks against Amazon.


Why is Trump using his bully pulpit to SMEAR Amazon? Here’s why…

Here we go with Trump publicly attacking Amazon again, accusing them of not paying sales taxes and abusing the post office…or something.

I have stated my concerns with Amazon long before the Election. Unlike others, they pay little or no taxes to state & local governments, use our Postal System as their Delivery Boy (causing tremendous loss to the U.S.), and are putting many thousands of retailers out of business!

But as one reporter explains, Trump’s sales tax claim is not accurate:

The first claim is false. Amazon now pays sales taxes in every state where there is a sales tax. (There are still complaints about its tax practices, but it pays.) It has also lobbied for a federal law that would make other online sellers do so. 1/2 pic.twitter.com/nLeNSjxycE

— Daniel Dale (@ddale8) March 29, 2018
That sounds right to me. When I purchase something from Amazon in my state, sales tax is applied.

CNN also backs this up with an article from exactly one year ago, where they start out by saying:

On Saturday Amazon (AMZN) will start collecting sales taxes on purchases in the last four states where it wasn’t doing so: Hawaii, Idaho, Maine and New Mexico. Four other states — Delaware, Montana, New Hampshire and Oregon — have no sales tax, while a fifth, Alaska, doesn’t have a statewide tax, but it does have municipal sales taxes.

We also pointed out the last time that Trump unfairly attacked Amazon that their agreement with the Post Office has nothing to do with their losses. In fact their package delivery service is profitable enough that it helps subsidize their letter and rural delivery service.

Amazon keeps the federal post office in business? Maybe it's time to privatize the whole thing. People want their mail delivered on time and with efficiency. Private firms have to compete in order to stay afloat. Government firms get money no matter how well or poorly they do.

Was Trump Amazon so that they would become a cheaper alternative to the United States Post Office?

So yes, once again it sounds like Trump is lying again to smear a private company. Ugh.

Why all the hate for Amazon? Here’s why:

Almost too obvious to say, but Trump's Amazon-bashing has always been inseparable from his media-bashing. The president is going after the owner of a newspaper that aggressively investigates him. pic.twitter.com/5dsRIXHBMO

This is a plausible reason, too--and praiseworthy. I have nothing against the Washington Post slamming the Fake News, left-wing media which spends more time pushing a narrative than telling a story. WaPo lied about Judge Roy Moore and smeared President Trump repeatedly to knock him out of the Presidency.

The press is so corrupt, so untrustworthy, one wonders when more major newspapers are going to collapse.

Here’s the bottom line for me. If Amazon is doing something illegal then the DOJ needs to investigate and prosecute them.

We are still waiting for the Department of Justice to prosecute Bill Clinton, Hillary Clinton, Mendacious Bob Menendez

But if they aren’t, then Trump needs to STOP smearing a private company. Period. It’s ridiculous that we would even have to say such a thing because it’s absolutely not how a president should behave. He sounds more like a Thug-in-Chief when he does this.

I disagree. Jeff Bezos deserves to get kicked around. It's time for our elected officials to target and punch back at industries who actively undermine our President and the country, especially when the President wants to do what is best for the country. 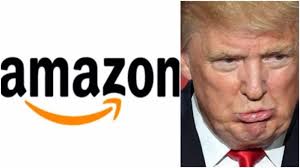 President Trump does not play by Queensbury Rules, everyone. This country needed a street fighter who would win, and Trump is doing exactly that. We need more winners and more winning, however, and that means a get-along Congress that wants to make the MAGA Agenda happen.

Right now, it's not happening. Private firms of all kinds are starting to erode and undermine the rights of citizens, however, so for me I have no problem with President Trump punching back twice as hard. Banking interests want to bankrupt gun owners and gun manufacturers. Big Tech companies in Silicon Valley think it's OK to censor people whom they don't agree with on their social media platforms. There is nothing wrong with the President taking on crony capitalism and bad businesses who want to undermine the rights of others and push false propaganda in the name of news.