The leadership in Washington DC sucks because the Swamp still runs the show.

Too many people make money off the government. They depend on the largesse. When Richard Nixon wanted to shut down the Tea Tasting Board, a number of interest groups lobbied against the move. 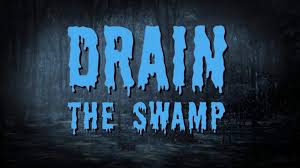 Nixon had to back off. The Swamp, the huge clutch of consultants, lobbyists, and bureaucrats who make big money off of government spending fight back against any cuts to the state and federal budgets.

Congressmen have more interest in keeping their jobs than making sure that we can keep our Republic.

No one said that Making America Great Again would be easy. We have a long, long road ahead of us, but with Trump's election and the fight against the political class, we are getting our country back.

In the meantime, it is well worth our while to put a fire under the butts of the bad leadership in Washington who continue to get rich while the rest of the country gets poor.

We need to get better leadership than McConnell, but who will replace him?

Posted by Arthur Christopher Schaper at 11:14 AM