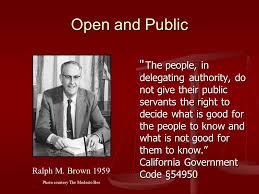 My name is Arthur Schaper, a well-known constituent of Assemblyman Muratsuchi, currently living in the city of Torrance.

We need a legislative remedy as soon as possible regarding a very frustrating outcome that was unjust, yet transpired in the LA Federal Court on Friday, April 6th, 2018.

My friend Gary Gileno was convicted of a misdemeanor following his decision to bring a camera and then briefly record an exchange with a federal officer in the 9th Circuit Court of Appeals building in Pasadena.

Here's a story about this miscarriage of justice in the Los Angeles Times:

Why did Gary bring the camera? Because he was going to attend a public meeting of the Los Angeles County Sheriff Civilian Oversight Commission, a meeting which must abide by the Ralph M. Brown Act, aka the open meeting/transparency law established by the the state of California in the 1950s and expanded since then.

The Commission Chair, Robert Bonner--himself a former federal judge--admitted openly that he did not know about the Ralph M. Brown Act. See this article for proof:

He therefore moved a California public meeting, which falls under the purview of the Brown Act, into a federal building, which bars cameras, photography, video-recording etc. without a court order.
None of the unfair circumstances would have befallen Mr. Gileno if:
We need an amendment  to the Ralph M. Brown Act which ensures, mandates even, that all public meetings must be held in buildings or other arenas where federal laws will not pre-empt the rights of California's citizens to exercise their full First Amendment rights per the Brown Act.

I would add that any government body which fails to comply would face a fine and would negate any legislative actions taken by that legislative body, as well.

Transparency and publicity are essential securities for good government and against misrule. The public has a right to videotape public meetings under the purview of the Ralph M. Brown Act, and no misunderstand or mistake--like a commission moving their meeting to a setting with limited public access--should ever happen again.

Please feel free to contact me if you have any questions.
Sincerely,
Arthur Schaper
Posted by Arthur Christopher Schaper at 8:31 AM