Note: On Wednesday, May 24, the Taiwanese Supreme Court ruled (as expected) to force "gay marriage"on the country. The ruling gives the Parliament two years to amend the laws to accommodate it, after which "gay marriages" must be allowed to begin. There was HUGE pro-family outrage. Read news coverage here. More info coming ... 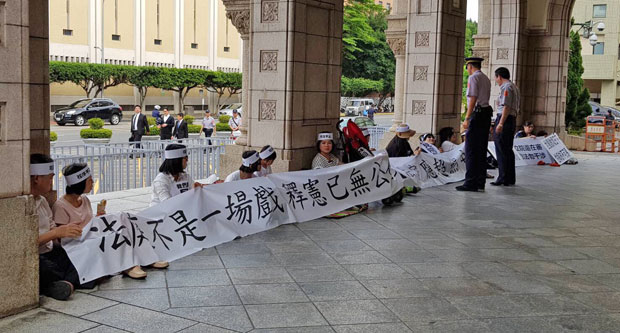 Mothers and their young children protesting at the Supreme Court building.
Outraged pro-family citizens from across Taiwan have been protesting and demonstrating outside of the Supreme Court building in Taipei, as the court prepares to announce its ruling on whether “gay marriage” is required to be legal under the Taiwanese Constitution. The ruling is scheduled to be announced on Wednesday, May 24, at 4:00 pm Taiwan time.
Pro-family activists are anticipating that the Court will cave in to political pressure, the media, and other corruption, and create a new “right” to “gay marriage” not currently found in the constitution – similar to what happened in the US. 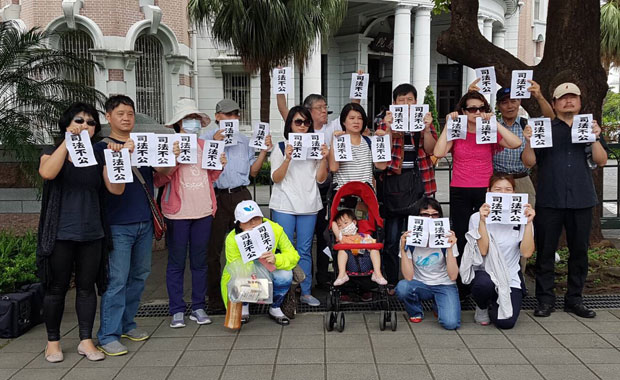 Entire families are involved.
According to a Taiwanese MassResistance activist (who has also forwarded us these exclusive photos taken by the pro-family organizations) people have been protesting night and day outside the building and inside the hallways. Protesters include young and old and even mothers with their young children. Some people are staging hunger strikes there. A Taiwanese youth group is particularly active. 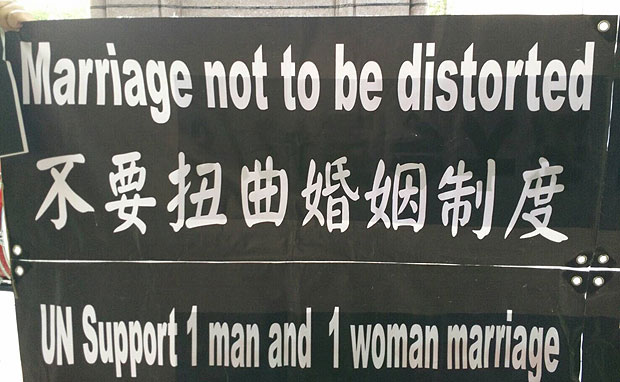 As MassResistance reported last December, over 200,000 people filled the streets of Taipei and other cities protesting an attempt to pass “gay marriage” in Taiwan’s national legislature. The bill was soon sent back for “more hearings” and “review” and has not moved forward since then.
According to activists, the MassResistance video and booklet translated into Chinesehave been used to help inform people about the effects of “gay marriage” on society.

The mainstream media in Taiwan regularly reports that polls show that “gay marriage” is favored by a majority of the people. But the president of a Taiwanese pro-family think-tank – who is also a MassResistance activist – says that in fact the majority of people oppose it and (similar to the US presidential polls last year showing Hillary Clinton winning by a landslide) the polls being cited are phony. 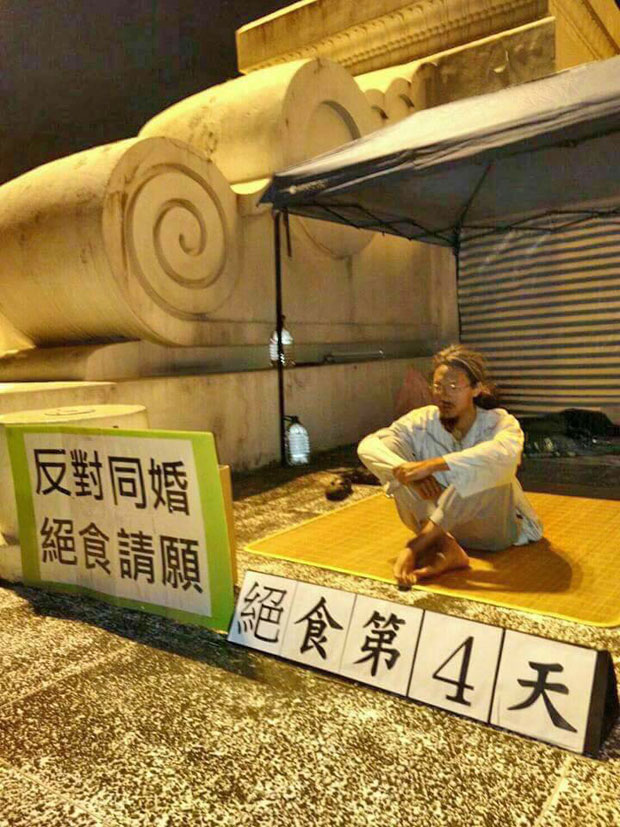 This man is on the fourth day of a hunger strike just outside the courthouse to protest the anticipated "gay marriage" ruling.

The biggest push for “gay marriage” -- from the President

In 2016, the Kuomintang Party, which had ruled Taiwan since the country’s founding, was defeated by the Democratic Progressive Party, and Tsai Ing-wen became President. She is widely rumored to be a lesbian, and immediately said she would use her power to push for “gay marriage” in Taiwan. She has also appointed a “transgender” cabinet minister.
But most important, the new president has appointed 7 of the 15 Supreme Court Justices, making it the most liberal Court ever, according to many.

Corruption in the Court

According to our Taiwanese MassResistance people, the Taiwan Constitution clearly defines marriage as “matters between male and female.” It would take an overwhelming re-interpretation of the text – or a constitutional amendment – to require the legalization of same-sex “marriage.”
But since an overwhelming re-interpretation has now happened in the US and other places, it could easily happen in Taiwan. There is near-universal belief that the Justices now feel they can simply exceed their authority to be faithful to the actual text and create any interpretation they desire, given the political climate and the media support.
This fear is fueled by the easy possibility of corruption. The Justices of the Supreme court have a term limit of eight years. But they are allowed to hold concurrent government posts by the President’s direct assignment. This directly affects their careers and especially their income. 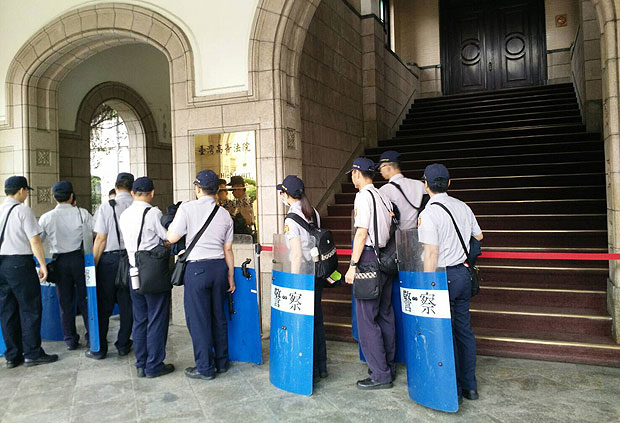 A line of guards makes sure no citizens get past their barriers.

The big splash on Wednesday

If the Court rules that “gay marriage” is Constitutionally required, it will likely postpone the  implementation of the ruling for a period of time – possibly until the end of the year – to allow the national legislature to tailor the laws to accommodate it.
We’ve been told by several sources that the expected Court ruling on Wednesday will initiate a massive reaction and that the fight will continue and even accelerate -- unlike in the US where the national pro-family movement basically wrung its hands and accepted it.
A major Taiwanese pro-family group has put out this announcement (which they also translated into English):

We will have a further report on what happens there!