The race to replace Congressman Tom Price in Georgia's 6th District is heating up.

Indeed, Democrats across the country--well actually just Hollywood and Washington DC--are dumping millions upon millions in this race.

Granted, Georgia has had some close shaves. Trump won Georgia by about 4 points, and it was really close in the 6th Distict.

Does that mean that The Democracy will scoop up this seat?

In fact, expect the turnout to be so bad for Democrats, that Karen Handel wins by double-digits. 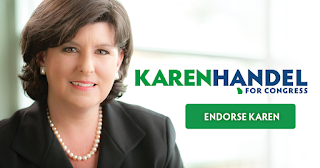 The media tried to turn the seat into a referendum on the direction of the Republican Party. This narrative was so nonsensical, I didn't waste my time reading it.

Check out the  latest commercial connecting the Democratic challenger to Nancy Pelosi:

Here's the latest eblast from the National Republican Congressional Committee:

BREAKING
Republicans Lead -- Ossoff takes a two point hit
>>>Pitch in to defend the majority<<<
Arthur -- It’s working!
Thanks to you, we are starting to get the truth out about Democrats’ attempts to drown out our candidates with lies.
FIRST: We knocked the Democrats out in Kansas.
THEN: We sent the Georgia special election into a runoff -- despite the Hollywood elites flooding the race with money.
AND NOW: With the race in a dead heat, we could bring home another BIG LEAGUE win.
We just need 10,000 grassroots contributions to keep winning special elections.
Will you help us win?
DONATE $1
DONATE $25
DONATE $50
DONATE $100
DONATE $150
Pitch in another amount
Thank you,
NRCC
DON
Posted by Arthur Christopher Schaper at 10:21 AM