The modern LGBT Left likes to posit everything as "resistance."

They are resisting hate.

They are resisting injustice.

They claim to resist inequality.

Look at this video to see what California MassResistance protesters had to deal with when protesting outside of a Target store--the corporation which embraced the destructive transgender ideology and announced permission to allow men to use women's facilities:

MassResistance President Brian' Camenker listed a large number of attacks against men and women who oppose the LGBT Agenda below:


Recently, I saw this huge billboard along Sepulveda Blvd in the Harbor Gateway, right next door to Torrance, CA: 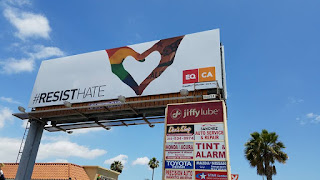 For everyone's information, this section of Los Angeles County is a family-oriented region filled with people of diverse and conservative backgrounds.

There are fast food restaurants, too, which cater to families, including children. Is this propaganda acceptable? Notice too that there are no references to sexual behavior or contact. The whole movement continues to push the lie that sexual orientation is an innate, genetic trait as opposed to a set of behaviors acquired by experience or circumstance.

Check out the long list of historical abuses from gay-transgender activists against men and women of conscience. Click here.

Here's the full video that I recorded when I saw that hateful sign:

It really sickens me how the LGBT Hate Machine wants to play up hearts and flowers, claiming that they are the full advocates for love.

What is loving about telling a segment of the population that they are "born that way" when clearly they are not?

How is it loving to lie to parents and children, teaching them that they are in bondage to feelings which are just that .. feelings.

Sentiments about sexual attraction and behavior are never the final determinant for anyone. Lets celebrate men being men, and women being women.

Let's celebrate the truth about familiy: one man and one woman.

For those who challenge these values, let's state the truth plainly:

As for all the mantras about equality, the whole movement has been anything but.

I am tired of being silenced for reporting the truth. I will not back away from the fight for natural law, natural rights, life, family, biology, and just plain truth.

Once I posted the video above on YouTube the following comments emerged below:

Check out these remarks, too:

While I do not approve use of hte word "faggot", I do recognize that more people realize what MassResistance and other Anti-LGBT groups have been saying for a long time. Notice "until they started persecuting churches." This whole movement is a perverse intrusion of the state into our daily lives.

And Satanic rebellion against a Loving God.

This agenda is not about normalizing a benign eccentricity, but a full-court press agenda out to undermine life and family, natural law and natural rights.

By the way, conservatives are the New Resistance. We are the true Resistance: 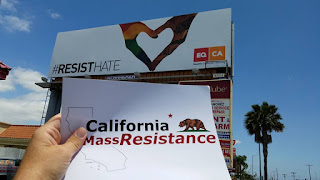